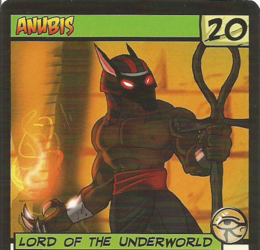 Dr. Blake Washington, Jr. found the Staff of Ra in a hidden temple to Ra. This ancient relic turned him into the mighty Ra, God of the Sun! Roderick Ward and his group of grave robbing adventurers found the Shrine of the Ennead, and within, the relics which transformed them into the powerful Egyptian pantheon!

However, not all tales of Egyptian gods are actually of relic-bearing heroes. In fact, one notable figure still exists: Anubis, Lord of Judgement! Anubis guards the gates of the underworld, judging those who pass from this life to the next, and manifesting in this world only when something upsets the balance of his scales. With so many new bearers of ancient Egyptian power making waves in this world, Anubis has been disturbed! He draws groups of powerful heroes and villains into his tomb to battle, and to be judged.

The Tomb of Anubis is filled with traps and trials, but also with treasure! Terrible mummies patrol the tomb, resetting the traps and assaulting any they come across. And, of course, Anubis himself judges all within. Do you dare to brave the Tomb of Anubis?!

Ra and Anubis have not had a good history. Sometime after Blake Washington decided to put away the mantle of Ra, his intern/apprentice Martin 'Marty' Adams is cursed while exploring a tomb with Blake. Blake, from his knowledge coming from Ra, knows what this curse means. After searching Ra encounters Anubis, and demands a release of his intern from the curse. Anubis offers a deal, the trade of Ra's soul for Anubis. Ra declines, arrogantly, and fights Anubis. Eventually Anubis gives in, but vows that Ra will pay for this one way or another.

Eventually, Anubis moves the shifting sands and reveals the Temple of the Ennead. He guides 13 grave robbers into it, 9 of whom survive and return with the nine objects that make up the Ennead. This is the payback to Ra, as they defeat Ra handily. When Ra comes to Anubis for more power to defeat them, Anubis informs him that there shall be no help as this is his payment.

During the OblivAeon event, Ra convinces Anubis (along with the Ennead) to fight OblivAeon. They crack his shield but are destroyed for their efforts. The Rod of Anubis, which now is an object like the Staff of Ra and holds the power and Knowledge of Anubis, is scattered to the wind with the other gods objects.

In the RPG, the Rod of Anubis is found and Anubis power returns, in the hands of Martin Adams!