plus 1 HP.
Art: Apostate holding Absolution with Fanatic in the background;
Flavor text: "We are diamonds that shine without fire!" - Apostate, Mystery Comics #369

minus 1 Relics are revealed. Put them into play. Shuffle the other revealed cards back into the Villain deck.
Art: Apostate holding a heart over a cauldron;
Flavor text: "His power grows more with every lie he utters." - Fanatic, Absolution #19

Apostate deals the Hero Target with the highest HP

minus 1 Infernal Damage. Play the top card of the Villain deck.
Art: Apostate stabbing a hole through the chest of a a man with Fanatic flying in from the background;
Flavor text: "Is this not what you meant by 'do unto others'?" - Apostate, Fanatic #27

At the start of the Environment turn, destroy all cards in play other than this card, Characters cards, and Relics. Then, destroy this card.
Art: Apostate standing the middle of flames around him;
Flavor-text: "Indeed... perish you shall!" - Apostate, Absolution #19

At the end of the Villain turn, Apostate deals the Hero Target with the highest HP 3 Melee Damage. Reduce Damage dealt to this card by 1.
Art: A closeup of the sword Condemnation;
Flavor-text: "This blade has heard the cries of a thousand souls, and still thirsts for a thousand more." - Apostate, Fanatic #25

At the end of the Villain turn, search the Villain trash and deck for the card Runes of Malediction. Put it into play. If you searched the Villain deck, shuffle it.
Art: A statue with glowing eyes;
Flavor-text: "These things you hold sacred are the worst of falsehoods!" - Apostate, Fanatic #25

Whenever Apostate deals Melee Damage to a Target, this card deals that Target 1 Infernal Damage.
Art: A closeup of the Gauntlet of Perdition on Apostate's right hand;
Flavor-text: "Not all armor is for defense!" - Apostate, Fanatic #27

Whenever a Villain Relic other than this card would be dealt Damage, redirect that Damage to this card.
Art: The Orb of Delirium held up by two dragon statues;
Flavor-text: "His corruption extends well beyond this plane!" - Fanatic, Mystery Comics #369

Increase Damage dealt by Apostate by 1. Reduce Damage dealt to this card by 2.
Art: Apostate holding the Periapt of Woe dangling from his hand;
Flavor-text: "I can feel them... the tortured souls within!" - Nightmist, Fanatic #26

Reduce Damage dealt to Relic cards by 2. When this card is Destroyed, move

Demon cards from the Villain trash into play.
Art: Runes written on a stone slab;
Flavor-text: "How swiftly the greatest defenses become the most horrible offenses." - Ra, Mystery Comics #370

Whenever a Player draws a Hero card, play the top card of the Villain deck. When this card is destroyed, search the Villain trash for the card "Condemnation" and put it into play.
Art: A book with chains wrapped around on it with a lock holding it together;
Flavor-text: "It is heavy with forbidden knowledge... " - Apostate, Mystery Comics #368

At the end of the Villain turn, this card deals the Hero Target with the Highest HP

minus 1 Melee Damage. Reduce Damage dealt to Apostate by 1.
Art: The Demon Grannum cracking his knuckles;
Flavor-text: "Think of me as a specialist." - Grannum, Mystery Comics #369

At the end of the Villain turn, destroy as many Hero Ongoing and/or Equipment cards as the number of Imp Pilferers in play.
Art: The demon Nahropt;
Flavor-text: "Power is currency in my realm, friend!" - Nahropt, Nightmist #6

At the end of the Villain turn, each Relic regains 1 HP. When this card is destroyed, move

minus 1 Relic cards from the Villain trash into play.
Art: An outline drawing of the Relic Spirit;
Flavor-text: "The tomes tell of such bound entities, but I had not thought to encounter one." - Nightmist, Nightmist #6 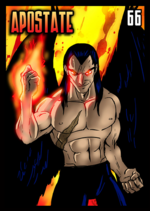 Fanatic, the winged angel of vengeance, has great strength and great power, but those abilities rely entirely upon her world view - her faith. So, when the black-winged man attacked her, claiming her to be one of his kind, she was taken aback. Bezaliel, as he called himself, pointed out all their similarities: their wings, their powers, even their swords! Bezaliel insisted to Fanatic throughout their fights that she was in fact his creation, and not a holy angel at all! Shaken, Fanatic fled from their initial confrontation, needing to meditate on these claims.

With Fanatic out of the picture, Bezaliel began his assault, bringing terror and destruction to the world by summoning dark relics and demonic entities to this plane. The heroes of the world joined forces to face him, calling him "Apostate", and he proved a terrible threat to the very existence of mankind.