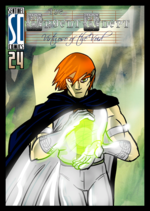 As long as human cultures have existed, there has always been a Virtuoso of the Void. A master musician who holds back the tide of chaos and destruction through their connection to the primal forces of the natural world. There is only ever one Virtuoso of the Void at a time, and each of these druidic songsmiths faced down the avatar of annihilation known as Akash'Bhuta as she rose time and time again to break all order in the world.

The Virtuosos of the Void always passed on their chosen instruments. The new Virtuoso would learn their fate when handed the instrument, the artifact itself imparting the title and the knowledge that order must be preserved. When a young bartender named Anthony Drake happened across an ancient Chinese bell in a cultural arts museum, he learned more about the ways of the world, as well as his own destiny, than he ever could have imagined. He was the newest Virtuoso of the Void and should have already been training in the ways of the Void, but Akash'Bhuta had disrupted the cycle early. She, over time, learned to destroy the instruments of the Virtuosos, and she had broken the fiddle of the previous Virtuoso of the Void before it could be passed on to his successor.

Anthony Drake set out, leaving his mundane life behind him. He sought the remaining instruments of past Virtuosos in order to learn to channel his new-found power. Calling himself The Argent Adept, he fights as an agent of order and restoration against the discord sewn by all manner of vile beings.

However, Akash'Bhuta is already aware of this newest Virtuoso, and she knows that the sooner she destroys him, the sooner she will be able to break the cycle of the Virtuosos entirely, leaving the world her domain to do with as she pleases...

Previous Virtuoso's of the Void

There have been many Virtuoso's. Since the first human's learned of music and the Void learned of them, there has been a Virtuoso. Many of their names and their instruments have been lost to time, but some remain.

Franz Vogel, due to the influence of Akash'Bhuta, mixed Blood Magic with his Void powers, causing him to seek out other's who could have been apprenticed as Virtuoso's and stealing their power for himself.

Variant: Originally received from the Wrath of the Cosmos preorder event for 100 copies preordered.

A team that was formed to aid a neophyte Virtuoso of the Void against Akash'Bhuta, the Prime Wardens were led by The Argent Adept in that conflict.

After a terrible loss to Akash'Bhuta - nemesis of all Virtuosos of the Void - Anthony Drake knew that he was not prepared to take on the force of Nature's Chaos. Without allies, Akash'Bhuta would end the line of Virtuosos with the death of Drake, and the world would be in great peril.

Calling out to those heroes he'd fought alongside, the Argent Adept assembled a team to face Akash'Bhuta. Each who joined him in the fight brought their own skills, abilities, and considerable powers to bear, but without the entire team, they would not have defeated the Avatar of Creation and Destruction. The Argent Adept, Captain Cosmic, Tempest, Haka, and Fanatic joined in battle, though even they would been lost if not for the momentary appearance of an unknown figure with a broad-brimmed hat and a six-shooter.

Now, that team still stands firm against threats from this world and others. Known as the Prime Wardens, the five heroes protect our world from otherworldly opponents and beings from beyond the known cosmos. However, their greatest challenge is still yet to come...

First Appearance: Virtuoso of the Void #58

With the recovery of the instrument, Anthony Drake set ot learning what he could from the baton's connection to the Void. What Drake didn't know until too late was how Vogel had used his instrument - in pursuit of blood magics. It was little wonder that Biomancer had been the one to locate Vogel's baton, as it was strongly attuned to powers of blood and flesh, and amplified those powers through the Void.

As Anthony Drake mediated on the power of the baton, his connection to the Void became perverted by the residual blood magic energy of his predecessor. So, while the Argent Adept continued fighting against the forces of evil, he also began to take on some of the darkness exhibited by the Crimson Conductor.

Variant: The Kvothe version of this card was originally announced by author Patrick Rothfuss on his blog in November 2014. The character Kvothe is originally from Rothfuss' Kingkiller Chronicles books, and Christopher has stated that Argent Adept was originally developed as a direct reference to Kvothe. "Dark Conductor" replaced that card in the Variant Pack due to Rothfuss owning the Kvothe card rights.

All sale proceeds from the card are donated to Heifer International, a charity that helps people raise themselves up out of poverty and starvation by promoting education, sustainable agriculture, and local industry all over the world.

If you wish for a copy of Kvothe, please support the charity, and do not print and play that version of the card.

Argent Adept: Dark Conductor is the replacement in the Ultimate Variant Pack. He has the same power as Kvothe.

The XTREME Prime Wardens were first revealed during the ARG Event in the Time vs. Time comic.

AA isn't a big part of Vengeance since the magical/extra-planar stuff doesn't really factor into the Vengeance plot, but there is Ruin to discuss. As has been mentioned in earlier episodes, he was a denizen of the Realm of Discord who wanted was sent by Gloomweaver to go after Nightmist, but once he's in the physical plane he runs into AA and can recognize the large amount of Void energy he contains. If he were to syphon off that Void energy, he'd be strong enough to dethrone Gloomweaver. So Ruin winds up fighting Argent Adept instead, and being able to feed on Void energy, AA's normal tricks are just making him stronger. This requires him to change tactics - instead of using his Void powers directly against Ruin, he has to instead use them to utilize the elements of the physical world around him that then, in turn, works out as an attack against Ruin (this is an instance where AA's powers wind up looking more like recognizable "magic" than his powers generally do - I'm assuming this is what's going on in the art for "Scherzo of Frost and Flame"). He freezes Ruin and then shatters him. Baron Blade has been watching this while AA was distracted with Ruin - and he knows that AA is very powerful and needs to be dealt with somehow if his plot is to succeed. He sees an opportunity when AA is fatigued after taking on Ruin and just sucker punches him to knock him out (this is likely just prior to the art on "Vengeful Assault"). He's largely absent from the rest of the story. This (along with, say, Nightmist having been Regression Darted) is a big reason why Baron Blade winds up trapped in the RoD for so long at the end of the story - most of the people who could have gotten him out were rendered incapable of doing so earlier.

Next up, the Ennead fight (see the Ra and Ennead episodes) where his major contribution was to try to counter the magical protective bubble created by Isis and to allow the heroes into Egypt. This is within his abilities and it would have worked had not Shu, y'know, stabbed him through the torso (see "The Grave Beckons").

Tactics - AA is seeking more instruments and power. He's already gathered Vogel's Baton and learns to manage it, then he gets Ruairí O'Ceallaigh's instrument, a fiddle - he was the Chartreuse Chanteuse. He's gained enough power that he can no longer contain all of it within himself. He goes to Pinion to see if a magician can do anything to help him maybe contain this some other way so he can keep accruing more. She finds a ritual in a book that she hadn't had a use for but might work, and Nightmist isn't around to tell her otherwise, and so they use it. This creates a book, the Libretta Obscura (approximately "Dark Booklet" - a "libretto" is the text of an opera or other long vocal work so it could also be "Dark Songbook") that wasn't conjured from the Void like the instruments were, but is still a songbook of his power, from within him. This also attunes all of the instruments to the book, rather than to himself. He uses the book, to then use the instruments. He's also got to deal with Akash'Dharsha in this timeline, but more on that next week.

RPG - At the end of OblivAeon, Akash'Thriya was injured to the point that she needed to absorb Void energy from the Nexus of the Void (becoming somewhat Void-like and giving her an even stronger connection to Argent Adept). She releases a part of herself, which begins growing into a giant tree in Megalopolis - known as Akash'Flora - just enormous, at least 20 stories tall with roots going throughout the city. The rest of her form is destroyed by OblivAeon and so this is all that remains of her. Where we pick things up (in the RPG starter kit), AA is communing with the tree as a kind of magical, musical groundskeeper - helping her integrate with the city and protecting her. He also manages to learn more stuff from what's left of her consciousness regarding the actual history of the Virtuosos and how in the past they train each other up rather than his self-taught methods. It's not a job for one person, but something to pass on. He learns about instruments that she's destroyed and others that she's just buried (if the associated Virtuoso is already dead she'd rather slowly absorb the Void energy that they can provide). He goes about gathering more instruments, not to necessarily gain power like in tactics, but so he can learn what he can from them and use them to find additional people with the requisite combination of attributes necessary to be a Virtuoso of the Void (you know, like a potential PC out there in RPG land).