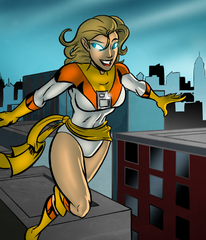 I nnate Powers
Flying
Beacon has Mobility
Brash
You must use all Attack+1 tokens you have whenever Beacon makes an attack.
Attomic Glare

Action: Choose an adjacent ally. Beacon and that ally each take an action now, in any order.
Flavor text: "You may not be Legacy, but you are certainly your father's daughter." - The Wraith, Freedom Five Annual #1

Action: After checking Range for this attack, remove each die which rolled higher than the target's range. For each die removed this way, add two dice that show the target's exact range.

Flavor text: "Let's see how you feel after getting hit by the brunt of my power, rock-beast!" - Beacon, Beacon #26

Ongoing: Surge: Gain a Defense+1 token.
Ongoing: When defending, you may reroll one of your Defense dice.
Flavor text: "She's not stopping! Why won't you just die?!" - Riot Ray, Beacon #29

Action: If Beacon deals damage with this attack, also Push that target spaces equal to the amount of damage dealt.

Action: Draw Line of Sight from Beacon along one of the six cardinal hex directions. Beacon makes this attack against each target in that line, ignoring Range.

Ongoing: Whenever Beacon makes an attack for the first time each turn, that attack may attack two different targets. At least one of those targets must be adjacent to Beacon.
Flavor text: "Gosh, she's not very nice, is she? She seems to cheerful, but then it's all fists and lasers!" - Citizen Spring, Beacon #41

In the Sentinel Comics RPG, Pauline Parsons takes on the mantle of Legacy.

Many years ago, in the world of Sentinel Comics, there was a rift in the timelines in an arc that came to be known as the Shattered Timelines. During this time - or times, rather - the Iron Legacy event occurred, leaving a hefty mark on the primary timeline of Sentinel Comics. However, not all of the results of that event were negative...

When Iron Legacy appeared, many heroes assembled to fight him, including Legacy AND his daughter, Pauline Felicia Parsons, who would someday become Legacy in her own right. In the course of that battle, both father and daughter were gravely injured, which resulted in them not being able to respond weeks later when word came that Baron Blade was planning some dastardly plot involving the Wagner Mars Base. Instead other heroes confronted the mad Baron and stopped his plot, which turned out to be an elaborate trap for the Parsons - surely, one of them would have fallen in that conflict. However, because of this temporal interruption, neither did.

Now, years later, Paul Parsons still leads the Freedom Five as Legacy, but his daughter is a formidable hero herself. Pauline Felicia Parsons knows that someday, she will take up the mantle of Legacy, but for now, she will take her own name: Beacon!

Beacon often fights alongside the Freedom Five, as well as many other heroes. More brash than her father, she relies on her nigh-invulnerability to get up close to her foes and unleash devastating blasts of energy from her eyes.

Felicia Parsons is the culmination of the entire line of Legacies, with the advantage of both additional powers and expert tutelage from her father. Villains should beware when Beacon is on patrol!

Sentinels of the Multiverse: Legacy