Now, meet the latest offering from Revo-Corp: Benchmark. He is the hero against which all other heroes will be measured.

With all of the shady dealings Revo-Corp has been involved in, it’s hardly surprising that they have been playing both sides of the field. They were waiting to unveil Benchmark when a carefully calculated villain plot had disabled many of Earth’s heroes, but OblivAeon seemed an even better opportunity! Either, Benchmark would save the day, positioning Revo-Corp as both corporation and savior, or everything would be destroyed and it didn’t really matter then, right? 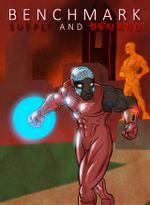 Variant: Originally revealed during the OblivAeon Kickstarter as the $250k stretch reward.

In an alternate reality, Benchmark is the only hero left in a world that needs heroes desperately. Backed by the angel-investor funded RevoCorp, Benchmark does all he can to protect the world.

Benchmark is running up against a classic economic issue of Supply and Demand. So, when a portal opens to a dimension with a threat against all reality, Benchmark must join the fray.