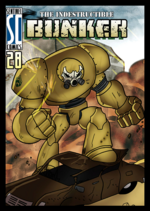 From the Enhanced Edition Official Rulebook

During the Civil War, the Ironclad project produced the USS Monitor, a heavily armored ship that took part in a decisive naval battle against the CSS Virginia. Less than a century later, the ongoing Ironclad project produced another success: the Personal Armament Exo-Chassis YS-1200. The suit allowed one soldier to do the work of an entire squad and operated in an elite battalion during World War II. 50 years later, a new armored suit was developed: the Personal Armament Exo-Chassis YS-1300T. When the government began its Freedom Five initiative, Lt. Tyler Vance was selected to operate the Bunker suit for the first time as part of a non-army campaign. Thus, Bunker became the second member of the Freedom Five, joining Legacy in the fight against the villains who threatened the world.

Tyler Vance spent the first 18 years of his life in the middle of a desert. Boulder City, Nevada was the town he called home, and his formative years were nothing short of, well, ordinary. He cut his teeth working as a mechanic in his father's dust-choked auto-shop, and he made extra cash repairing slot machines in local dive bars and diners. His limited spare time was filled with thoughts and dreams of getting out of that town. Most of his friends would probably never make it further than Vegas, but Tyler swore he would. As soon as he was old enough to join the Army, he headed to the nearest recruitment office and signed up.

However, fate has a cruel sense of humor. Tyler Vance left his home wanting to see the world at the same time as the United States went to war in the Middle East. Tyler's journey merely took him from one desert to another. Proving his mechanical aptitude early on, Tyler was quickly assigned to an armored division. Over the next few years, he rose through the ranks, and eventually he attained a position as a Lieutenant leading his own platoon.

During his eighth year of service, Lt. Vance was leading a mission through contested territory outside of Fallujah when his platoon was surrounded by a large enemy force. As they tried to gain a defensible position, a sandstorm caught them by surprise, damaging their communications equipment. Cornered with no way to radio for help, Vance managed to keep a cool head and guide his unit safely through the situation. The siege on his platoon lasted for 48 hours until the sandstorm subsided, enabling allied helicopters to locate them.

Despite the duration and complications of the siege, Vance's platoon was able to escape with zero friendly casualties and only three serious injuries. The Army brass referred to Lt. Vance's leadership in the situation as both "prodigious" and "exemplary", and the defensive positioning Vance had utilized was later added to the standard training regimen for all armored division personnel.

When Tyler arrived back in the States, he was awarded for his valor with the Army's Distinguished Service Cross. After the ceremony, he was approached by General Joshua Armstrong, who offered him a chance to further serve his country by participating in the Freedom Five Initiative. While operating outside the official Army chain of command, the position would provide Vance with a unique opportunity; he would operate the Personal Armament Exo-Chassis YS-1300T suit, an automated battle suit capable of wielding the firepower of a full battalion. Vance accepted General Armstrong's offer and became the first mechanized officer in the US Army. As the second member of the Freedom Five, Tyler "Bunker" Vance now acts as Legacy's right hand man and the strategic brains behind most of the Freedom Five's mission planning.