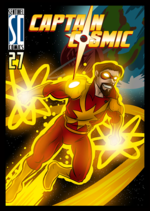 Captain Cosmic is a stalwart defender of Earth against the myriad threats from the outer reaches of the galaxy. But his great power draws attention from many powerful adversaries… Good thing Captain Cosmic learns quickly how to bring his power to bear!

Hugh Lowsley and his older brother Nigel Lowsley have had rather straight-forward lives. Growing up in their home city of Huntingdon, the two both had interest in law and justice. Nigel followed the way of justice and became a Constable, while Hugh was more interested in law and became a Barrister. They did their jobs, led their lives, and once in awhile would spend a night stargazing together - one of their favorite hobbies from their childhood.

One such night, they saw a brilliant line of purple energy score the night sky. At first the brothers were elated to get to see such a breathtaking event, but they quickly became concerned as the purple energy seemingly turned and grew increasingly larger. In a matter of seconds, the hillside shook as the energy blasted into the ground less than a kilometer from where the Lowsley brothers were watching.

Hugh and Nigel quickly made their way to the crash site, still in shock from the recent impact. In a massive crater, they found a glowing purple crystal, roughly half a meter long. As the two approached it, energy arced from the fragment to the two men, bringing both of them to their knees. For the Lowsley brothers, the world turned black.

When Hugh came to, he was unsure as to how much time had passed. He was lying on the edge of the crater, but neither the purple crystal nor his brother Nigel were anywhere to be found. Assuming his brother had made his way home, Hugh did the same and slept for another dozen hours. When he awoke this time, he was not in his bed. He was a meter above it, lying on a translucent golden plank of energy. Obviously, this came as something of a shock to Hugh, and with that slight bit of panic, the golden energy dissipated, and he fell to his bed with a whump.

Over the coming weeks, Hugh searched for his brother, but Nigel had disappeared. No one had heard from him at work, and his home was untouched. Hugh devoted the bulk of his time to finding his brother, but to no avail. In that time, he also learned that he could summon and control "constructs" made of golden energy. His limitations were mostly his imagination, though his constructs could be damaged and destroyed, having roughly the strength and resilience of ballistic glass. He was not certain as to what had happened or what it meant, but he knew that, somehow, he had gained power from that purple crystal, and now, he had a responsibility to use that power.

As Captain Cosmic, Hugh was able to join forces with other mighty heroes to protect the Earth. He was even the first hero to aid the Argent Adept in the first confrontation with Akash'Bhuta, making Captain Cosmic the second member of the Prime Wardens. However, even while fighting alongside mighty heroes and standing between innocent people and assured destruction, he is ever searching for his lost brother, hoping to find some clue as to his disappearance.

Variant: Originally revealed during the OblivAeon Kickstarter as the $90k stretch reward.

In the pages of Cosmic Concurrence, Nigel and Hugh Lowsley stood together against the terrible manifestations of Infinitor. With the aid of his brother, that villain was able to regain his mind and shield his mind from the influence of OblivAeon.

Captain Cosmic was a powerful combatant in the OblivAeon fight, fighting the Aeon Men, Scions, and even taking the fight to OblivAeon itself. Part of what made him so powerful was the very thing that tormented his brother Nigel. Infinitor was plagued by the whispers of OblivAeon, and in the fight where Hugh fought alongside his brother against his powers, he learned how to tap into those whispers, shield his mind from them, and take advantage of the knowledge they provided him. And thus, Hugh was was able to intercept OblivAeon and prevent the deaths of millions. However, that fight with OblivAeon left Hugh entirely expended. With his guard down and his powers unable to defend himself, Captain Cosmic was about to be destroyed by OblivAeon....when Infinitor reappeared. Materializing from the power of OblivAeon itself, Nigel stood there before his brother for one last time. The brothers’ eyes met, and then Nigel ceased to exist as a wave of overwhelming energy bombarded his form.

The other Prime Wardens extracted Captain Cosmic from the fight, even in the face of his protests. He wanted another shot at the cosmic foe that had just killed his brother. However, Captain Cosmic’s powers were both more dangerous and more unstable now. Somehow, the destruction of Infinitor imparted the power of his manifestations to his brother, leaving Hugh a volatile hero, bent on revenge.