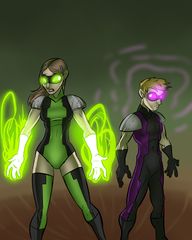 Grace Charles was only five years old, but she knew that she had to take care of her younger brother, Owen, who had just had his first birthday. Their home in Rook City was literally falling apart around them, and Grace was afraid. She had woken up in the middle of the night in phenominal pain - something terrible was trying to get out of her, and when she opened her mouth to scream, the sound of her voice was drowned out by the sound of destruction as waves of energy tore through the house around her.

She didn't understand what had happened or what was happening, but she knew that Owen might be in trouble. Fighting the pain, she made her way out of her room and down the hall to Owen's room. He was awake, but calm, and when she gathered him up, she felt his calm quell the pain inside her. Grace struggled to carry the toddler, but putting him down just meant more pain, so carry Owen she did. She managed to get herself and her brother out of their house, just before it collapsed.

That was ten years ago.

Now, Owen does more looking out for Grace than vice versa. His sister constantly emits dangerous levels of radiation that do not affect him, but if she loses control, the ensuing explosion of energy is catastrophic. The only thing that has protected Grace from herself - and the world from Grace - is Owen's innate ability to calm Grace, abating her powers.

Having nowhere else to go, Grace and Owen have lived in Rook City for their entire lives, though it has been ruins for the majority of that time. They subsisted by moving from safe house to safe house, staying with other refugees that are kind enough to take them in. It was a tenuous existance, as if Grace lost control or anything threatened Owen, they quickly had to find a new home in the wake of the resulting destruction. However, recently, they found a group of people who turned a blind eye to their unusual abilities and welcomed them into their community. Lately, they have been working together to protect the others in their safe house. Grace has been practicing focusing her powers while Owen helps keep her within a safe threshold. They are still learning how to fight, but Grace and Own wryly refer to themselves as Catastrophe and Verge.