Chokepoint regains 5 HP. Chokepoint deals the non-villain target with the lowest HP 5 energy damage. If that target is destroyed, Chokepoint regains 10 more HP.
Art: Chokepoint in what appears to be Unity's lab with the disembodied pieces of Swift Bot floating;
Flavor text: "You were pushed into a limbed form, which was not your truth. Let's try again." - Chokepoint, Freedom Five #771

Chokepoint deals the hero character card with the most cards in play 4 energy damage. Select 1 non-character card from that hero's play area. Put it face-down in the villain play area.
Art: Chokepoint rips the Bunker suit in half off of a a stunned Tyler Vance;
Flavor text: "Open up! I'm here to make new friends." - Chokepoint, Freedom Five #768

Reveal the top card of the villain deck. Each player must put 1 card that shares a keyword with the revealed card from their hand face-down in the villain play area. Then, put the revealed card into play.
Art: Choke becoming Chokepoint by accepting the crystal left by Deadline with energy coming out of her eyes;
Flavor text: "I don't understand. You're so loud! So bright!" - Chokepoint, Cosmic Concurrence #19

Destroy all environment cards. Put any targets destroyed this way face-down in the villain play area.
Art: Chokepoint breaking into a room with Unity and Omnitron-U;
Flavor text: "You cannot hide. You tread on ground that shrieks with your passage. Come to me." - Chokepoint, Freedom Five #773

Reduce damage dealt to Chokepoint by 1. Whenever Chokepoint would be dealt 5 or more damage, prevent that damage and destroy this card.
Art: Chokepoint holding off blasts of energy from Captain Cosmic with her hand on a control panel which also has connections to her back;
Flavor text: "Her manipulation of energy is coercive. She bends the focus of things to her will." - Captain Cosmic, Prime Wardens #25

When this card enters play, destroy 1 Equipment card. The first time a hero card leaves play each turn, put it face-down in the villain play area.
Art: Chokepoint has turned pieces of Absolute Zero's equipment into a drill that she is pointing at a captive Wraith;
Flavor text: "I don't think much of your communication methods. You'll regret hurting Ryan." - The Wraith, Freedom Five #772

Play this card next to an Equipment card. If there are none, put this card face-down in the villain play area. The card next to this card has a maximum HP of 5. At the end of that card's hero turn, that card deals each hero target 2 lightning damage. If that card would leave play, put it face-down in the villain play area, then destroy this card.
Art: A panicked looking Nightmist looking at the floating Amulet of the Elder Gods which is taking a shot of energy;
Flavor text: "Its core screams in outrage! I can access its power, but at what cost?" - Nightmist, Mystery Comics #480 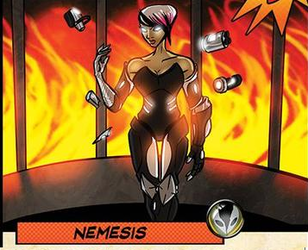 When she was an infant, Evelyn Moore’s parents turned to the U.S. government for help. Their daughter couldn’t talk yet, but she “spoke” to machines. More alarmingly, when she did, they fell into their components, which created a metallic cocoon for the child. None of this was covered by the parenting classes the Moore family had attended. A representative of a group called the Ironclad Project offered to take care of Evelyn, but only if her parents were willing to sign her over to the care of the project. Seeing no other option, they agreed, and Evelyn became the ward of the Ironclad Project.

Years went by, and Evelyn grew, learning to control her powers. She was told that she was being trained to be a part of the army. A new army that fought with better power instead of hundreds of soldiers. However, her lack of control and her hot-headedness meant that the Ironclad Project had little use for her. She had learned to absorb tech to plate herself in steel and coat her skin in wires, talking to the tech as easily as she talked to herself, but it wasn’t enough. Even though she desperately wanted to prove her worth, those monitoring her kept wanting more than she could give.

Then, one day, she absorbed a tank.

There had been talk of military training going on in the adjacent facility, and Evelyn wanted to know more. Sneaking past her monitors, she found herself next to a massive M1 Abrams tank. It spoke to her of cold steel and internal combustion. It sounded beautiful to her. So she let it fall into its pieces, and she wore its skin.

All hell broke loose in the army base. A tank had just fallen apart, and a person-shaped pile of plate-steel walked out of the wreckage. Soldiers opened fire on the figure, who ran through a wall, disappearing into the nearby hills.

Since then, Choke has been a regular opponent of the Freedom Five and their allies. She is frequently at the heart of troubles concerning military installations or stockpiles of weapons. Her ability to commuicate with metal on a primal level twisted her mind. In her unhinged state, she sought to free all metal from "unworthy" uses. It was hardly surprising that she ended up allying with the Vengeful Five when Baron Blade called. But when she was fatally wounded by K.N.Y.F.E., many believed that would be the end of Choke.

However, Choke had heard a peculiar voice - unlike any she had heard before. The Freedom Five had recently prevented Deadline from destroying the earth, and the alien’s odd device was still housed in their headquarters. And she could hear its voice. It could save her, and she could give it purpose once again.

In a shocking turn of events, Choke's body melded with the energy crystal used by the villain known as Deadline, granting her new knowledge and power. Chokepoint was born. Taking power from the tech of the heroes who stand in her way, Chokepoint is on a self-appointed quest to destroy the world and rebuild it in her own image.

Evelyn drew the resonating crystal at the heart of the device into herself, sealing her wound, but also opening her mind to the powers of the alien tech. It could sense weak points. She was originally trained to save the world, and now she knew how. She would show those at Project Ironclad that she was worthwhile after all. Using her new knowledge, she would erase all the weak points from the world. All she needed was a bit more power…

With the necessary elements right at hand, Chokepoint was born. Taking power from the tech of the heroes around her, Evelyn is on a self-appointed quest to destroy the weak points of the world, and beyond.

Chokepoint’s scope is without limit. She already has growing concerns that the star at the center of this galaxy will eventually die or explode, and that getting rid of it sooner rather than later might be necessary…