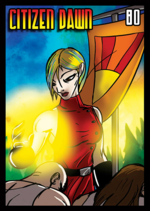 By the time she was in her teens, Dawn Cohen knew she wasn't like the other girls. Specifically, she could pull energy from any natural light source, making herself stronger in sunlight and allowing her to warp and control the Aurora Borealis as it glowed over her home. Her displays of power brought her much attention, but after being poked at and prodded by countless "normal" people, she'd had enough. Testing the limits of her powers, she found she could do almost anything she imagined. Flight, energy blasts, the ability to destroy or to repair using the sun's energy was all at her fingertips. The more she used her powers, the stronger they became, and the more quickly they responded to her whims.

She lost all patience for the "normals", eschewing their company for solitude, and spent decades combing the globe for a place of her own. She set up a home on the savage island which she named: Insula Primalis. Located in the frigid arctic circle, the island was heated by an active volcano, covered in lush jungles and spiky obsidian fields, and populated by all sorts of prehistoric flora and fauna. Giant, man-eating plants. Strange, skittering insects which defied all modern logic. Even dinosaurs - megabeasts that only survived to this modern age due to the unique climate of the island. She deemed this inhospitable land a place where she could be left alone. And yet, solitude was not in Dawn's future.

She was approached by other powerful individuals who had heard of the power of Dawn and thought her potentially a great leader. At first, she resisted, turning away all that sought her, but their words did get through, and she began to consider. She was the most powerful individual in all the world, and what did she do with that power? Why was she forced to hide away from the world, just because she was stronger? She put out word, sending her message through the world by putting her thoughts into the radio waves and launching information through the satellites overhead. The Citizens of the Sun, those stronger than their “fellow man” need no longer hide. Citizen Dawn called all such Citizens to her side. Together, they would sear the impure darkness from the world, and no longer be considered weak or strange. Instead, they would be as gods among men, and as equals only to each other.

Citizen Dawn has never been known to be brash. She bides her time, gathers her forces, and only strikes when provoked… or prepared. And she has been preparing for some time.

Now that a new source of power has found its way to our world, the Citizens of the Sun are much more active than before. Rather than keeping to their island fortress on Insula Primalis, they have been striking out, hunting down more power, and constantly harrowing the heroes who attempt to stand in their way.

What could Citizen Dawn be planning? Surely she has some goal in mind, but her actions only leave devastation in their wake. Someone must halt or at least slow her acquisition of power… before it is too late!