Citizen Hammer deals each non-Villain target 1 fire damage. Each villain target regains 1 HP.
Art: Citizen Anvil glowing orange and Citizen Hammer glowing yellow;
Flavor text: "Both of them read temperatures off the charts. They're essentially on fire from the inside!" - Tachyon, Freedom Five #704

Destroy the Environment target with the lowest HP. Citizen Hammer deals each non-Villain target 2 fire damage.
Art: Visionary and Expatriette looking on a glowing mummy walks towards them;
Flavor text: "That's a first. Never seen an incendiary mummy before." - Expatriette, Tomb of the Bizarre #41

Citizen Hammer deals the Hero target with the highest HP 2 fire damage. Prevent the next damage dealt by that target.
Art: Citizen Hammer snapping his fingers and producing a flame;
Flavor text: *SNAP* "Let's start some fires!" - Citizen Hammer, Rumble in the Jungle #5

When this card enters play, destroy all other Position cards. Reduce damage dealt to Villain character cards other than Citizen Anvil by 2. If Citizen Anvil is ever incapacitated, flip his character card, restore him to 5 HP, and destroy this card.
Art: Citizen Hammer with his glowing wings coming out and shattering part of the ground;
Flavor text: "He is no holy warrior, but his resolve is indisputable." - Fanatic, Fanatic #32

When this card enters play, destroy all other Position cards. Reduce damage dealt to Citizen Hammer by 1. The first time Citizen Anvil is dealt damage each turn, Citizen Hammer deals the source of that damage 2 fire damage.
Art: Citizen Anvil using his shield to cover Citizen Hammer from an incoming blast;
Flavor text: "Yeesh, Lucas. Try to have a little fun with it. You're always so serious!" - Citizen Hammer, Rumble in the Jungle #3

When this card enters play, destroy all other Position cards. At the end of Citizens Hammer & Anvil's turn, Citizen Hammer deals each non-Villain target 1 fire damage and Citizen Hammer and Citizen Anvil regain 1 HP each.
Art: Citizen Hammer with flames all around with Citizen Anvil behind him with a glowing fist;
Flavor text: "Now we're talking! Burn it all! Keep that juice flowing, grumpy." - The Visionary, Mystery Comics #490

Reduce damage dealt to Citizen Anvil by 1. At the end of Citizens Hammer & Anvil's turn, Citizen Anvil deals the Hero target with the highest HP 2 melee damage.
Art: Citizen Anvil's Hammer and Shield stacked on the wall;
Flavor text: "Take up your weapons, reforged in the fires of your home. You have work to do." - Citizen Dawn, The Citizens' Imperative 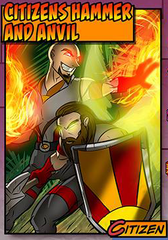 None, they are a single Card in Tactics 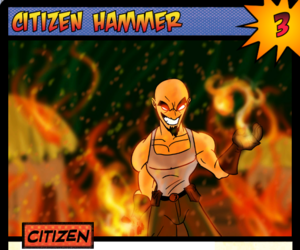 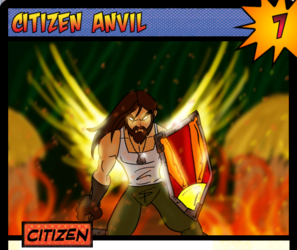 When Hayden Turk learned that a snap of his dry fingers would cause his hands to burst into flames that did not burn him, and that he could expand those flames to burn everything around him, it didn't take long for him to get in a lot of trouble and up in a high-security prison with his hands encased in concrete.

Lucas Ender's ability to create protective wing-like projections which allowed him to teleport great distances, coupled with his combat prowess with hammer and shield made him of interest to Citizen Dawn. She found the elusive pariah and tasked him with breaking Hayden Turk from prison. Lucas did so with minimal difficulty, and now the two work side-by-side as Citizens Hammer and Anvil.

Now, Citizen Dawn has sent them on a mission. She hopes to find more powered individuals who would be willing to join her ranks. Perhaps even the impressive psychic, the Visionary, could see a future in which the world burned brightly with the power of the Citizens of the Sun!