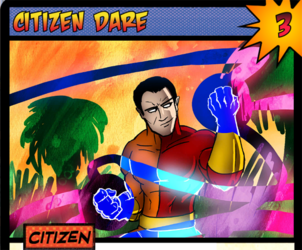 Amelia Gordon was one of Project Cocoon's many Pregnant test subjects, but she was the only one to bear twins. Gene Gordon was born minutes after his brother Gregor, and both displayed signs of unusual power within a few weeks. Project Cocoon had two powerful success with the Gordon Brothers and intended to use them to their fullest.

While their brothers were in their teens, and in captivity at Project Cocoon, Gene heard murmurs from the outside world of a being of great power. There were rumors that a powerful woman was calling other beings of power to her side and Gene knew he wanted no more of the powerless people who enslaved him. Attacking the guards and his brother to make his escape, gene made his way to Citizen Dawn's side and was christened Citizen Dare. 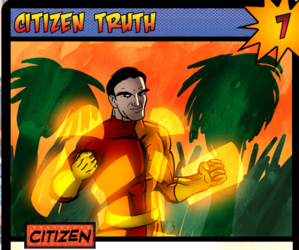 Gregor had always been the more calculating, even in his youth. He was no more happy in captivity than his more reckless brother, but he bided his time, waiting for the right moment to obtain his freedom on his terms. So, when his brother made his escape, attacking Gregor in the process, all of Gregor's plans changed. He followed Gene and joined the Citizens of the Sun as Citizen truth in order to protect his brother. 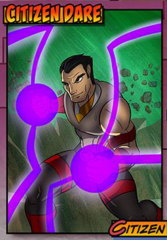 I nnate Powers
Action Ability
This Attack may Attack two different Targets with the same Attack Roll, if Citizen Truth is within Range 3 and in Citizen Dare's line of sight, he must be one of the Targets. 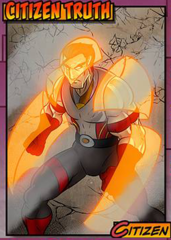 I nnate Powers
Ongoing Ability
When Defending, Treat one Die in the Attackers Roll as Blocked without Assigning a Blocking Die.
Ongoing Ability
If an Ally would be Attack within Radius 3 and Citizen Truth's line of sight, you may have Citizen Truth be the Defender against that Attack.