In this timeline, Legacy and Baron Blade have long fought each other, the heroic Paul Parsons constantly thwarting the villainous plans of the dastardly Baron Blade. Legacy's daughter, Pauline Felicia Parsons, grew up knowing that her father was a hero, that he fought crime, and that his life was in constant danger. The weight of the Parsons family line was clear: where evil reared its ugly head, there would always be a Legacy there to stop it.

When she reached 18 years old, Felicia was given a Legacy costume by her parents, and her father began training her in earnest. Her whole life had been dedicated to the pursuit of justice and preparing herself for the inevitable combat against evil, and she took to this new training like a champion. The years of crime-fighting with the Freedom Five were hard work, but some of the best years of her life.

Years later, Felicia Parsons was the best prepared to accept her father's death at the hands of Baron Blade.

The countless heroes who had fought alongside Legacy were stunned. No one could accept that it could happen. But Felicia calmly organized a lovely funeral for her father, and then smoothly stepped into his place in the Freedom Five - she had prepared her whole life for this, and she was ready to wear this mantle. No one saw the few tears she shed in silence for her father.

As awful as the death of Legacy was, an alternate timeline experienced an even more terrible event.

In that same fateful battle, the mad Baron cornered and murdered the young Felicia Parsons, America's Newest Legacy, which left Paul Parsons America's Final Legacy. Legacy did not handle this well at all. He flew into a blind fury, tearing Baron Blade and the Wagner Mars Base apart.

Enraged and grief-stricken, Legacy disappeared. At Pauline Felicia Parson's funeral, little was said. The collected anguish of the mourners was far too great. Paul Parsons had not been heard from and did not attend the funeral, though some claimed to see a figure land in the graveyard later that night.

When Paul Parsons reappeared, it was in a very different form than before. The same strength and power was evident, but the man formerly called America's Finest Legacy was overcome with despair both for his family and for the future of mankind. His choice was clear: after him, there would be no Legacy. The world must be purged of all evil while he could still fight.

Paul Parson patrolled the world, silencing those who stood in his way swiftly and brutally. No longer the confident leader of the Freedom Five, he took to wearing armor and to destroying any suspected evildoers without pause or question. All of the strength and fortitude of the hero Legacy was now channeled into an unbending global dictatorship. Called Iron Legacy by his former allies, he reshaped the world into one which shook beneath his iron fist.

The heroes of the world came together to attempt to talk sense into the man who inspired so many of them, but any who attempted to stop him were dealt with swiftly. The toll was staggering. The world's foremost hero was now the greatest threat to freedom and liberty, all in the name of justice.

Now, with the timelines in disarray and so many worlds and realities intersecting, Iron Legacy has a chance to spread his rule even further. Will the heroes be able to stop him? Can they even bring themselves to fight? Iron Legacy has no such compunctions. His will is iron. Justice will be done. Do not stand in his way. 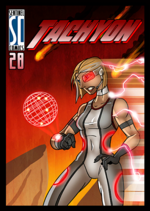 After Legacy's fall, and the rise of the Iron Legacy global domain, Tachyon went deep into hiding. With her speed and smarts, she was able to avoid Legacy and his Iron Guard, but it took years before she was ready to rebuild a team.

Dr. Stinson scoured the globe for her former teammates and found those who had surived. Most were worse for wear, but, with the addition of an old foe in the hollowed-out shell of an experimental Bunker suit, and a mechanical golem that believes it is actually the long-dead Unity, a new team was formed. Will they be strong enough to withstand the great challenge they face? Only time will tell… 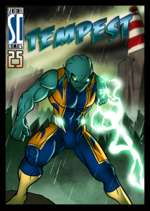 Mack Dalton had seen one of the best members of the human race become one of the worst tyrants ever. After losing an arm to Iron Legacy, the fight left Tempest. The Maerynian hero sought safety and isolation. However, when Tachyon circled the globe, assembling a new team, she found the alien hero formerly known as Tempest. Now, knowing the true terror of tyranny, Tempest is a proud and resolute member of the newly formed Freedom Six. 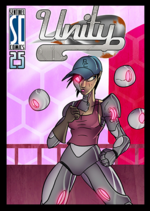 On her deathbed, Unity reached out to the medical robot she had built to try to repair her wounds. It was unable to save her, but it could still serve a purpose. Using the last of her energy, she altered the bot into a shape which echoed her own form, pouring all of her power into this new bot. The bot awoke, knowing that is needed to complete the transfer, but it was too late. Devra Caspit was no more, and this golem-spawn was all that remained of the hero known as Unity.

When Tachyon began scouring the earth, looking for heroes to stand up to Iron Legacy, she was surprised to be contacted by her former intern. Dr. Stinson had believed that Unity had not survived Legacy's initial attack on Freedom Tower. Now, she was faced with a very familiar face. Unity had returned, albeit with more metal pieces than before. Unity claimed that she rebuilt herself, but her allies knew there was something not quite fully the same person they remembered.

This new Unity never vocally acknowledged the truth of her existence, but she did visit the grave of her creator whenever she had a chance. She knew she had a responsibility to be the hero Devra Caspit always strived to be. 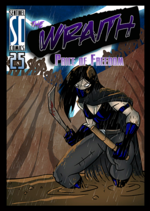 When the Iron Legacy destroyed Freedom Tower, the Wraith made her escape and returned to Rook City. With a hardness beyond anything she had exhibited before, she sought out and took down the key leaders in the criminal empire known as the Organization. The Wraith knew no mercy. By killing the Operative, she learned the true identity of the Chairman, and Chairman Pike did not last another day. However, rather than dismantling the Organization from the top, the Wraith took a different direction. She knew the Price of Freedom, and used the power of the Organization to work against Legacy's Iron Guard.

Tachyon had a difficult time locating Maia Montgomery, and an even harder time coming to terms with her former friend's actions. However, the Wraith was still the Wraith, and - all reservations aside - Tachyon knew she needed help to go up against Iron Legacy. The Wraith grudgingly agreed to be the sixth member of the Freedom Six, though each of the other members were wary about allied with the Chairman.