Next up, the Ennead fight (see the Ra and Ennead episodes) where his major contribution was to try to counter the magical protective bubble created by Isis and to allow the heroes into Egypt. This is within his abilities and it would have worked had not Shu, y'know, stabbed him through the torso (see "The Grave Beckons"). 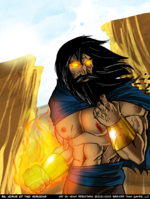 When The Ennead made their modern-day appearance, destroying any population centers they entered and calling out their challenge for Ra to come and face them, the heroes of the world immediately took notice. None so fast as Ra himself, who arrogantly sought them out alone to meet their challenge. The combined might of The Ennead proved to be greater than Ra anticipated, however, and he was defeated in a massive battle which left the surrounding cities and desert even more of a wasteland.

The fight with The Ennead left Ra stunned and shattered. He could not remember who he was, nor that there was a part of him that used to be Dr. Blake Washington, Jr. The being formerly known as Ra wandered into the desert, disappearing from the public eye entirely for years.

Meanwhile, The Ennead continued their assault on the world, drunk with power and thirsting for more! Various teams of heroes, such as the Freedom Five, took them on and managed to quell their attacks for some time, but The Ennead proved consistently able to regroup and recover, redoubling their efforts each time.

Now, years later, The Ennead are met with a new challenger who reminds them of an ancient foe they once had. Ra has returned from his wandering, but he seems something more…