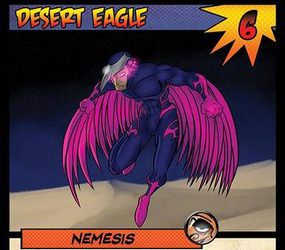 Mikal Jadoon - another RevoCorp employee like Re-Volt. He's got a wing suit that lets him fly and laser eyes (which aren't an attack, but a cybernetic "Eagle Eye System" that lets him see farther, more accurately, through objects somewhat, and even adjusting the part of the EM spectrum he's able to see (say into infrared or ultraviolet). If he's got a "visual lock" on a target he can also fire bolts from his wings, more accurate the longer he's locked on, and generate a protective shield.