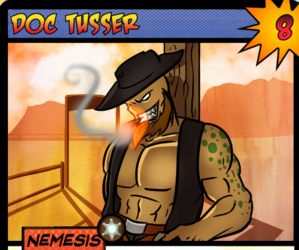 Doc Tusser is commonly referred to as a 'Troll' like human. He has an amazing ability to regenerate from almost any wound. As a cow-hustler and horse-wrangler in the 1800's, he is one of the Targets of Chrono-Ranger, who was sent back by Con to remove him. This was pushing Chrono-Ranger's rules about not targeting humans, but Doc Tusser was sufficiently monstrous to fly. Chrono-Ranger thought he killed Doc Tusser a few times, until they realized how regenerative he was.

Con sent Chrono-Ranger back with a special concoction that would turn Tussers regeneration on itself, causing him to destroy his own body. It worked.