If this card would be Destroyed, Flip it instead.
The first time this Card is dealt Damage each turn, it deals each Target 1 Energy Damage.
At the End of this Villain Turn, select a Player with an Active Hero. That Player may Discard a Card or Destroy one of their Non-Character Cards. If they do neither, this card deals the Hero Target with the Highest HP in that Player's Play area 5 Energy damage.

At the END of this Villain Turn, Add 1 Devastation Token to the Inevitable Destruction Card.

Flavor text: "I shudder to think of the returned oppressor Uko under the power of OblivAeon." - Captain Cosmic, Tome of the Bizarre #82

When this card flips to this side, restore it to 15 HP.
This card is immune to melee and projectile damage. Whenever this card would be dealt energy damage, it regains that much HP instead.
When this card is destroyed, each player may draw a card and use a power. Then, remove this card from the game.
At the End of this Villain Turn, this card deals each non-villain target 3 energy damage. Then, destroy X hero non-character, non-target cards where X = the number of targets destroyed this turn.

Whenever a card is destroyed, add 1 Devastation token to the Inevitable Destruction card.

Flavor text: "You are an end of things, but you shall be your own fate. Return now to the ether from which you came!" - Tempest, Scion Strike #1

The Scion with the highest HP deals the Hero target with the lowest HP 10 irreducible Infernal Damage. If no targets are destroyed this way, move 1 Scion from the other Battle Zone to this Battle Zone.
Art: Sky-Scraper and Captain Cosmic looking defeated with Faultless looming in the background.
Flavor-text: "Things look a bit rough, and... well... they are quite bad. I don't know that we can go on." - Captain Cosmic, Prime Wardens #64

The Scion with the lowest HP deals the Hero Character Card with the lowest HP 3 Infernal Damage. Then, if that Hero is not incapacitated, each player discards 1 card.
Art: Nixious entangling Argent Adept in its tentacles.
Flavor-text: "Unhand me, vile fiend! Do not beg the Void to find itself within you..." - The Argent Adept, Scion Strike #4

The Scion with the lowest HP deals the 2 Hero targets with the highest HP 2 Psychic Damage each. Each Hero dealt damage this way destroys 1 of their non-Character cards.
Art: Dark Mind sending her psychic energy through Setback's torso and Expatriette's forehead.
Flavor-text: "The way you care for each other is... touching. I'll take that. It's all mine now." - Dark Mind, Scion Strike #3

Energy Damage and the Hero target with the lowest HP

Move OblivAeon to this Battle Zone. Put the bottom card of the Scion Reserve in this Battle Zone. That Scion deals each Hero target 1 Projectile Damage and 1 Fire Damage.
Art: ObivAeon holding in his hand Borr the Unstable who's charging up with explosive energy.
Flavor-text: "Yes, my master. I will carry this burden until the carrying undoes me." - Borr the Unstable, Scion Strike #4

Destroy 1 non-Target Environment card. The Scion with the lowest HP deals each non-Villain target 2 Psychic Damage. Each player discards 1 card.
Art: A group of citzens looking despondent and apathetic while a shadow of Voidsoul looms over them.
Flavor-text: "There is no hope. Nothing is real but despair. All you have left is your regrets." - Voidsoul, Freedom Five #797 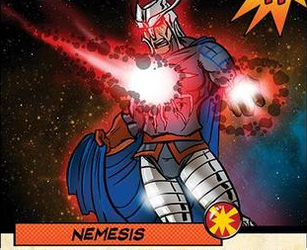 The alien named Rou Dov Uko was first a conqueror and despoiler in deep space. It was only a matter of time before his ruin came to Earth. After his repeated defeat at the hands of Captain Cosmic he needed a new source of energy. OblivAeon provided that source, but at a great cost. Now, Empyreon barely holds himself together. And this new energy has to go somewhere!