One player must put a card from hand on the top of their deck. Ermine deals each Hero target 1 projectile damage.
Art: Ermine stealing a gun from Expatriette who is busy shooting other targets;
Flavor text: "Don't mind lil' old me... Just your , uh, friendly neighborhood gun inspector?" - Ermine, Vengeance #5

At the end of Ermine's turn, discard the top card of each deck.
Art: Ermine talking incessantly to a tied up and upside down Wraith;
Flavor text: "... and that's when you walked right into my trap as if you didn't realized I'd be here waiting for you which, really, is a shame considering... " - Ermine, Freedom Five Annual #27

At the end of Ermine's villain turn, destroy 1 Hero Ongoing card and 1 Equipment card. If at least 1 card is destroyed this way, destroy this card.
Art: Ermine stealing a device out of the Bunker suit;
Flavor text: "Gosh, I sure hope this isn't something important. That'd be awful!" - Ermine, Freedom Five Annual #27

The first time Ermine would be dealt damage each turn, redirect that damage to the Hero target with the highest HP.
Art: Ermine holding up a mirror which reflects a blast towards Legacy;
Flavor text: "Yeah, she's subtle, all right. Subtle like a ton of bricks." - Mr. Fixer, Vengeance #3

If Ermine would be dealt damage, prevent that damage and destroy this card.
Art: Ermine swinging handcuffs in her finger as she gets out of a police vehicle;
Flavor text: "Well, boys, I do like jewelry, but I don't care much for these silver bracelets." - Ermine, Vengeful Five One-Shot

At the end of Ermine's turn, move 1 Hero Ongoing card from play to the top of the associated Hero's deck. If Ra is active in this game, reduce all fire damage by 1.
Art: A closeup of Calypso in the ocean;
Flavor text: "If you're looking for a watery grave, you've come to the right place." - Calypso, Exordium #1

At the end of Ermine's turn, this card deals the Hero target with the second highest HP 2 melee damage. If the Naturalist is active in this game, increase damage dealt by this card by 2.
Art: A closeup of Equity;
Flavor text: "If there's a price on your head, hope the price doesn't catch his attention." - The Wraith, Exordium #3

At the end of Ermine's turn, this card deals the Hero target with the highest HP 2 infernal damage. If Fanatic is active in this game, all Hero targets are immune to damage from Hero targets.
Art: A closeup of the Seer;
Flavor text: "Is this reality? Concentrate on the pain. Life is pain, hero." - The Seer, Vengeance #4

At the end of Ermine's turn, destroy 1 Environment card. Then, if Sky-Scraper is active in this game and there are no Environment cards in play, this card deals each Hero target 2 melee damage.
Art: Tantrum stopping a truck with one hand;
Flavor text: "Calm down? Little girl? Oh, now you're gonna pay!" - Tantrum, Vengeance #5 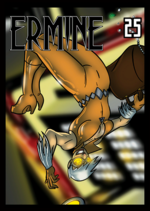 Cassandra Lilya grew up in the same socialite circles as Maya Montgomery. They both shopped at the same exclusive boutiques, were regularly seen at major fashion weeks, boarded their horses at the same stables, attended the same high class parties, and even sent spies to find out what the other was wearing to said parties, as wearing the same dress would be social suicide.

Maya despised the foolish girl “Cass”, finding her investment in the social scene to be entirely vapid. Maya only engaged in these activities as a cover for her actions as The Wraith - Cass clearly thought that these silly frivolities were the most important parts of life, and Maya could not think less of her.

But Maya was wrong. Cass thought just as little of the bubbly Maya Montgomery. She could not know the thrill of leaping from rooftops and breaking into the most well-guarded vaults in the world. The public life of Cassandra Lilya was merely a cover for Ermine, the greatest thief in the world!

Ermine had stolen most of largest gems and most expensive archaeological finds in the world, selling them at top dollar to private collectors to fund her extravagant lifestyle. However, when a huge diamond was on exhibit at a museum in Rook City, Ermine’s attempted thievery was interrupted by The Wraith, who trivially defeated her and left her tied up in the museum right in front of the diamond. The authorities attempted to arrest her, but without actually catching her in the act of committing a crime, there was nothing for them to prosecute her for. However, her secret identity was revealed publicly, and Cassandra Lilya was ruined.

She continued to act as Ermine, but she quickly found that she actually missed her social outings. She cursed The Wraith with her every waking breath. So, when she received a lovely, handwritten letter from Baron Blade, offering her the chance for vengeance, she readily joined his team.

Now, Ermine, the world’s greatest thief, fights as part of Blade’s Vengeful Five! Ermine will have her revenge on The Wraith!