plus 1 HP. If The Operative is active, she regains

plus 1 HP.
Art: The Chairman sat ont he edge of a vat which he has just emerged from, with The Operative standing by, with a towel;
Flavor text: "Humanity, refined." - The Operative, Tome of the Bizzare #21

Put all the Underboss cards from the Villain trash into play.
Art: The Muscle lighting dynamite from a cigarette, by a prison window with The Fence.
Flavor text: "Oddly, there were no officers on duty at the time." - The Deputy, Built in a Day #6

Play the top 2 cards of the Environment deck.
Art: The Chairman faces front, behind him are two masked figures holding The Wraith in her Rook City costume.
Flavor text: "I built this city; challenge me here and you will find out I am not just a creator... " - The Chairman, Rook City Renegades #4

Reduce Damage dealt to The Chairmen, The Operative, and Underbosses by 1.
Art: Cop watching a theft in progress.
Flavor text: "Heh, I doubt you'll get the help you're looking for from the local law enforcement." - Tony Taurus, Mystery Comics #191

At the end of the Villain turn, this card deals the Hero Target with the lowest HP

Melee Damage unless their Player discards 1 card.
Art: Group of enforcers.
Flavor text: "No matter how subtle your enemy, a knife between the shoulder blades will seriously cramp his style." - The Chairman, Rook City Renegades #3

At the end of the Villain turn, this card deals each Hero Target 2 Projectile Damage.
Art: Man holding a tommy gun against a wall with bullet holes and light streaming through.
Flavor text: "Gunmen? Dangerous. Unpredictable. Not flashy enough." - Baron Blade, Burying the Blade #1

When a Hero card is played, play the top card of the Villain deck.
Art: Woman in a phone booth.
Flavor text: "One man's mistake is another man's opportunity." - The Chairman, Built in a Day #2

At the end of the Villain turn, destroy a Hero Ongoing or Equipment card.
Art: A man's head upside down, as if descending from the ceiling on a wire, near a jewel in a case, surrounded by detector laser beams.
Flavor text: "Ah, Rook City, where even your shoes would walk away if they weren't tied on." - The Wraith, Rook City Renegades #1

Whenever a Hero card is destroyed, both The Chairman and The Operative regain 3 HP. At the end of the Villain turn, search the Villain trash for a card named Thief. Put it into play.
Art: Man with eyepiece examining jewel.
Flavor text: "The instincts for greed and violence are the two most reliable sources of income." - The Fence, Built in a Day #4

At the start of the Villain turn, this card deals each Hero Target 2 Melee Damage. At the end of the Villain turn, search the Villain trash for a card named Enforcer. Put it into play.
Art: Muscled man with crowbar, brass knuckles and UK flag tattoo.
Flavor text: "I can do a great deal more than just scare you." - The Muscle, Built in a Day #3

What happens if you defeat the chairman before you flip the Operative? 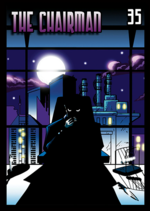 I realize I have not been working in this department for very long, but I was going through the case files from the investigation into organized crime in Rook City from two years ago and found some concerning discrepancies. The eventual conclusion of the investigation found that, while some organized crime did exist, it was in no way prevalent or pervasive, and that each criminal group was isolated. Furthermore, the report spoke strongly against the existence of a “Criminal Empire” in any way unifying the organized criminal activities in the city. However, I also found several important accounts, including some significant evidence that there could be some sort of controlling figure or group, and that the “isolated criminal activities” were, in fact, all linked to a single entity or organization. Indeed, I could find no evidence to support the conclusion that Rook City organized crime is solely the product of isolated groups. With more evidence coming to light of late, I believe that it is within the best interests of this department to reopen the case. I would be more than willing to head up, or at least be a part of any task force assigned to this case, as I am already very familiar with the evidence and where the last investigation fell short.

Thank you for your consideration. I look forward to working more with you on this. Detective Renay

Well done. You have done this department proud with your exemplary investigation into this case. We will look into setting up a task force right away. However, your attention to detail and thorough investigation skills are urgently needed elsewhere at this time. Therefore, you have been reassigned to the research and records division, in order to help maintain more order in the completed case files. Thank you again for your work and dedication.

Rook City inhabitants complain about terrible crime rates, but few are aware that a single organization, led by a shadowy figure known only as "The Chairman" is responsible for the vast majority of Rook City's corruption. Tales of The Chairman are few and far between, but he has purportedly held the reins of organized crime in Rook City for the better part of the last century. Most criminologists theorize that "The Chairman" must be a title, passed down through the years. Some wild stories have been told of one man who has somehow lived this long, controlling the streets since their creation, but there is no evidence to substantiate these claims. However, if such a man did exist, Rook City surely would be at his mercy, and the tales do not mention mercy…

When Rook City fell, many thought it would be the end of the elusive figure known only as The Chairman.

Turns out, it was far more of a beginning.

The Chairman was revealed to be none other than Graham Pike, who should have been well over one hundred years old. Instead, Chairman Pike was a man in his prime. Or, at least, he was before his city collapsed around him. The destruction of Rook City came hand-in-hand with the crumbling of the man who had ruled the city for the majority of its history. As his chemically-enhanced body deteriorated, he supplanted his vitality with remnants of injections and stimulants from the now defunct Barzakh Wing of Pike Laboratories. His newly "evolved" state was one of certain strength, but also one of madness.

Now, with his resources meaning little, his empire crumbled around him, and his minions barely more than chemically-grown children, Exemplar holds himself to be the shining example of how man creates his own success. Hurdles and setbacks only exist to make the ultimate man even stronger. Graham Pike has left the trappings of the average person behind in exchange for perfection. Normal human morality and mortality are obsolete in the face of the works of a true visionary

Rook City was ruled by The Chairman. But Broken City has been reborn in Exemplar's own image. Anyone trying to prove otherwise will be taught a harsh lesson.