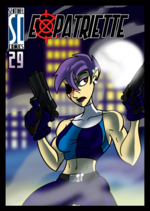 The hail of gunfire shook the armored truck Amanda Cohen was crouched behind. "Amateurs," she growled, adjusting her eyepatch as she surveyed what equipment she had left. Assault Rifle? Check. Tactical Shotgun with incendiary rounds? Check. Of course, her custom-built hand guns, Pride and Prejudice, were always at her side, both loaded with hollow points. She sighed to herself. "Guess I'm going in with only half of my usual gear. Well, that's life!" The tell-tale click of a cartridge being replaced echoed from the other side of her impromptu barrier; she moved. Out from behind the car, her assault rifle throwing bursts of suppressive fire towards her attackers, she quickly side-stepped to a nearby building, rolling the last 5 feet to end her move behind cover. Taking stock, the gun-for-hire grinned. She was down a clip - they were down two men. As she loaded a new magazine into the weapon, her guts suddenly twisted and her knees hit the pavement, hard.

"Heh, you waited too long, little girl. Gave me enough time to find you. Now bullets are the least of your worries," the floating figure laughed. He clenched his outstretched hand, racking her body with more pain. A manic smile grew on his face as he heard the sobs coming from the prostrate mercenary. At least, they sounded like sobs. Her hands hit the ground, slowly pushing her body up as she laughed. "Little girl?" she chuckled. "Who do you think I am? I didn't waste my time. I was waiting for you to show up!" The floating figure twisted his hands into fists, focusing his powers on her. To his credit, she faltered a moment before continuing. "Cute. Telekinetics. I bet your mommy's real proud of you." Her attacker's eyes grew wide, then narrowed as he brought the full-force of his mental might to bear- and a CRACK rang out. The floating man's body fell to the ground, collapsing like a bag of bones. Amanda deftly holstered Prejudice, smirking. "Psychics. They're all the same. Get them talking, get them panicked, and that precious brain of theirs jams up like an AR-15 pushing Wolf rounds. Mission accomplished." She stretched, collecting her assault rifle to finish loading the magazine. "Maybe the next powered mark I get will have actually heard of Expatriette!"

Growing up without superpowers was hard for Amanda Cohen. As the daughter of Citizen Dawn, leader of the Citizens of the Sun, she was expected to blossom into a leader herself with a vast array of powers. Instead, she spent her childhood scorned for being unworthy and, after a terrible battle that cost Amanda her right eye, she left her mother and the Citizens of the Sun behind.

Hardened against the power-hungry, she hunted tyrants and oppressors. In her crusade, she learned of groups of heroes, such as the Freedom Five, but was skeptical. With time, she grew to appreciate their use of power for good, and not for gain. Taking the name "Expatriette," she strikes out against those who abuse power, using only her wits and an impressive arsenal of firearms. 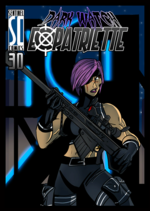 While things deteriorated more and more in Rook City, the heroes who regularly patrolled the failing city grew increasingly concerned about the disappearance of Mr. Fixer. Three of those heroes joined forces: Expatriette, Setback, and Nightmist. They worked together to protect Rook City and to investigate the loss of their friend.

Amanda Cohen fell into her leadership role well. With powerful allies at her side, she was able to take a tactician's approach to combat, laying down heavy fire when necessary. As part of Dark Watch, Expatriette takes a bit more time with her actions, having to consider her moves more carefully as she is now responsible for not just her own life, but for those of her teammates. And with teammates come friendship, and perhaps even more...

Though she used to be a loose cannon, Expatriette's experience and cool under fire makes her the brain of the team, especially when it comes to strategy and battle plans. Amanda Cohen brings her skill as a marksman and an impressive arsenal to bear against the foes of Dark Watch, but her extensive contingency plans and insistence on team combat training is a large part of why the team has survived as long as they have.