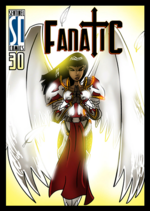 Tens of thousands of children die everyday worldwide; Helena should have been one of them. Like many children in Lima, she was most likely born into a poor family. Her father may have worked at the bottling factory. Statistically, her mother probably sewed pants for a living. And growing up in a large family, it seems likely that no one had time to look after the young girl, Helena. At least, that's the best guess the doctors could offer when she came through their emergency room.

At around age 6, Helena was playing in the streets of her city, as is common of the unattended children there, when she was hit by a city bus. Anyone who had been with her had fled, not wanting to draw attention to themselves. The fact that she survived the ambulance ride to the hospital was miraculous in and of itself. However, when Helena was pronounced dead only to suddenly spring back to life on the operating table exactly three minutes later, the nurses began crossing themselves frantically, claiming that she had been spared from death by the hand of God.

Indeed, once the girl had regained consciousness, she spoke adamantly of visions of Heaven and claimed that God had sent her back for a purpose beyond her understanding. While some remained skeptical, the hospital staff couldn't deny the amazing speed with which she recovered. While she apparently suffered severe nerve damage, which left most of her body entirely numb, she had almost no physical scarring. The only other effect of the accident was total memory loss. She had no idea who she was, and no family ever came to claim her. It was an old nun visiting the hospital who named her Helena.

As the time came near to release the girl from the hospital, she demanded that she be placed under the care of the convent. Over the course of her stay there, she had grown fixated on her vision of the afterlife. The doctors considered her troubled, but they deemed her to be neither a harm to herself nor to others. With few other options, they decided to honor her request, sending her to be raised by the nuns.

Most of her adolescence was spent training to become a nun herself. Helena was a pious girl, heralded as an example to the rest of the convent. When she hit puberty, she was startled to discover that great, angelic wings had begun growing from her back, but was unsurprised - they felt familiar. She kept these hidden from the rest of the world, but their appearance had altered her sense of purpose irrevocably. The wings which had sprouted from her back finally helped to reveal the meaning of the words she had heard in her vision so many years ago. She knew that her role was not meant to be a passive one.

Over the next few years, she began to grow weary of the system of the convent, urging them to be more involved in stopping the evils going on outside their walls. Finally fed up, she decided that she would reveal her secret during the next day's church services. When, after a rousing speech condemning their inaction, she revealed her wings to the congregation and claimed herself to be an angel of the Lord, she was met with only silence and horrified stares. Disgusted, she stormed out of the convent and never returned.

Concerned that she would be pursued once the initial shock wore off, Helena sought refuge in the catacombs under the city. While exploring the tunnels, she stumbled upon an ancient cache of Templar arms and armor. With a determination bordering on fanaticism, she trained herself in the use of it. A year passed in solitude, during which she fasted and claims to have been sustained by faith alone. She awoke one morning morning with her fingertips bloodied and her sword lying nearby. Smelling the acrid scent of smoldering metal, she picked up the sword and found that runes had been carved into its blade. She realized that she could read the angelic runes - they read "Absolution". The sword became a focus for her prayers, manifesting radiant flames along its blade. Taking up "Absolution", she emerged from her tomb. It was time for her to fulfill her purpose: to purge the world of evil. 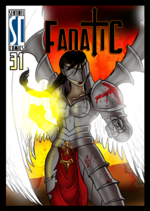 Variant: Originally revealed during the Infernal Relics Kickstarter as the $34K stretch reward.

After Fanatic was confronted by the deceiver, Apostate, she had to regroup. She spent three entire days sequestered in the bell tower of a monastery in prayer and meditation, not stopping to eat or sleep. Finally, she emerged from her requiescence, refreshed in the knowledge of her steadfast righteousness.

Fanatic has armed herself against the lies and corruption of Apostate. She stands prepared to fight by faith alone - not allowing herself to be distracted by the clamor and deceit of the world and her enemies! 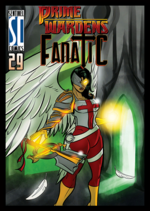 After years of going from extreme to extreme, Fanatic finally found some moderation, and her allies in the Prime Wardens had no small part in helping the avenging angel center herself. Now, she stands more resolute than ever - not for vengeance or for zealotry, but for the defense of the innocent and the advancement of the greater good.

The last hero to join the ranks of the Prime Wardens, Fanatic had been witnessed most recently fighting a dark-winged Deceiver. As a result, the Avenging Angel had donned more protective armor and a face-plate that obscured her vision. So, when Fanatic joined the fray against Akash'Bhuta wearing armor that allowed greater mobility and freedom of movement, half her face-plate torn off, and a her sword a jagged shard, the other heroes were as taken aback as they were pleased to see her.

Her faith stronger than ever, Fanatic as a member of the Prime Wardens is a resolute opponent of evil in its many forms. She fought against demons and deceivers, and takes the fight to the Court of Blood against blood mages and vampires. The hero called Fanatic does not fully know her role in this world, but she knows one thing: she is Justice. 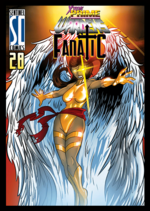 The XTREME Prime Wardens were first revealed during the ARG Event in the Time vs. Time comic.

One of the lead-ins to the OblivAeon is the death of Ra, and they had a close relationship - his last words to her was that he "always believed in her." She comes out of that strengthened, finally embraces the name of "Fanatic" herself, and is ready to take the fight to OblivAeon, but once that's done there's a time of mourning. She's realized that there was a reason she didn't get close to people before and it was for the better and goes off on her own.

It's been several years and she's more or less gotten over things and is working with heroes again. She's a bit troubled with there being a new Ra, but it's obviously a different person, but she's able to deal.

One of the lead-ins to the OblivAeon is the death of Ra, and they had a close relationship - his last words to her was that he "always believed in her." She comes out of that strengthened, finally embraces the name of "Fanatic" herself, and is ready to take the fight to OblivAeon, but once that's done there's a time of mourning. She's realized that there was a reason she didn't get close to people before and it was for the better and goes off on her own.

As things get going she's still reeling from everything she's just been through (fighting an evil version of herself, being helped by a good Apostate, the death of Ra, etc.) and is still grieving, embittered, full of rage about things, becoming reclusive, but as the RPG goes on we're likely to see more about her in terms of her being a spirit of Judgement which should be interesting in the future.