Destroy X Hero Ongoing cards, where X = the number of Surge cards in Friction's trash. Friction deals herself 3 lightning damage.
Art: Friction using her speed to vibrate into Setback's chest;
Flavor text: "Gwah! Get your hands off - no, get your hand outta me!" - Setback, Vengeance #4

Friction deals herself and the X hero targets with the highest HP 2 lightning damage each, where X = the number of surge cards in her trash.
Art: Friction sending out shocks to multiple Bee Bots;
Flavor text: "Stupid robots made by a stupid intern who got a job because she's got stupid powers." - Friction, Freedom Five Annual #27

Friction deals herself 1 lightning damage. Friction deals the Hero target with the highest HP X melee damage, where X = the number of surge cards in her trash.
Art: Friction punching an unsuspecting Tachyon;
Flavor text: "Pow! Right in the kisser! Teach you to fire me!" - Friction, Vengeance #2

Friction deals each villain target 2 lightning damage. Play the top card of each villain deck in turn order.
Art: Friction with the rest of the Vengeful Five with shocks coming off them;
Flavor text: "You heard the Baron! Let's take'em out!" - Friction, Vengeful Five One-Shot

If Friction would be dealt 5 or more damage from a single source, prevent that damage and destroy this card.
Art: Friction sidestepping a blast from Absolute Zero;
Flavor text: "Hah! Not fast enough! Sucker!" - Friction, Freedom Five Annual #27

Friction is immune to lightning damage.
Art: Lightning being absorbed by the Shock Dampeners;
Flavor text: "You must protect the dampeners. Otherwise, your speedsuit will be your coffin!" - Baron Blade, Vengeful Five One-Shot

At the end of Friction's turn, play the top card of Friction's deck.
Art: Friction wearing Tachyon's HUD Goggles;
Flavor text: "Hey, these things are great! Lots of warning messages though. Must be an error." - Friction, Vengeful Five One-Shot

At the end of Friction's turn, this card deals the Hero target with the second lowest HP 1 projectile damage. If Guise is active in this game, targets dealt damage by this card cannot deal damage until the start of Friction's turn.
Art: A closeup of Argentiun;
Flavor text: "Silent he may be. But he makes up for it in lethality." - Expatriette, Vengeance #2

The first time a hero card enters play each turn, this card deals the Hero target wih the highest HP 1 energy damage. If Parse is active in this game, increase damage dealt by this card by 1.
Art: A closeup of Highbrow;
Flavor text: "Try not to over think it, hon. I can already see you're overdoing it. Tsk." - Highbrow, Vengeance #5

At the end of Friction's turn, this card deals the Hero target with the highest HP 3 melee damage. If Haka is active in this game, any time a Hero target would deal damage to Friction, redirect it to this card.
Art: A closeup of the Hippo;
Flavor text: "Ain't nothin' that can stop me!" - The Hippo, Exordium #1 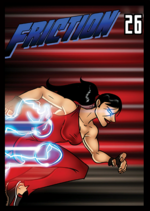 Krystal Lee was overjoyed to get accepted as an intern at the Eaken-Rubendall Research Laboratories. Working with Dr. Meredith Stinson was the greatest possible honor, and the opportunity for Lee to share her own brilliant ideas with Dr. Stinson meant she would have a chance at her own greatness! She couldn't wait.

Unfortunately, after only a few months working in the lab, things were not looking so good for Krystal Lee. She was constantly leaving her work area a mess, which irritated Dr. Stinson to no end, she made countless errors in her lab reports, and she even broke valuable lab equipment by not keeping a close eye on an experiment. Worst of all, Dr. Stinson didn't approve of any of Lee's inventions, claiming them all "derivative" and "not actually functional". So, when Lee received her notice that she was out of the intern program, she wasn't terribly surprised. However, she was terribly furious.

She broke into the "work in progress" lab area and stole several gadgets, notably a "speedsuit" prototype which Dr. Stinson had hoped would allow others to operate at speeds close to her own without injury. Lee was familiar enough with the Freedom Five and their workings to know that Baron Blade had been a constant threat, and attempted to make contact with him. After several heavy-handed inquiries, Lee received a form-letter from Baron Blade, claiming no vacancies in his Vengeful Four team, but Lee was adamant. She needed vengeance.

She powered up the speedsuit, altering the regulators in an attempt to prevent whatever damage might be dealt to her. Wearing the suit, she could move so fast she put out waves of heat, but she had to be careful not to run through her own waves. Also, the likelihood that the suit would result in two broken legs for the would-be villain was terrifyingly high.

Pushing these fears aside, she tracked down Baron Blade for an in-person audition, which resulted mostly in property damage and an entirely exhausted ex-intern. Unimpressed by her abilities, the Baron did see something in Lee that spoke to him. The overwhelming need for revenge.

Baron Blade reworked her speedsuit and gave her the name Friction. Now, Friction works as a scout and speedster as part of the Vengeful Five. She will show Tachyon once and for all what she missed out on!