Reveal the top card of the Environment deck. If that card has HP, Fright Train deals the Hero target with the highest HP X projectile damage, where X - the HP of that card divided by 2, rounded down. Then, discard that Environment card.
Art: Fright Train stopping the Mononrail;
Flavor text: "Time to let off a little steam!" - Fright Train, Vengeance #1

Fright Train deals the two non-villain targets with the lowest HP 2 melee damage each.
Art: Fright Train coming threw a wall and a Kraken tentacle to attack Tempest;
Flavor text: "Looks like you're on the wrong side of the tracks!" - Fright Train, Vengeance #6

Increase damage dealt by Fright Train by 1. Increase the first damage dealt to Fright Train each turn by 1.
Art: Fright Train with the guardrail up over his head;
Flavor text: "A frenzied monster, hell-bend on destruction. He knows no peace." - Haka, Vengeance #1

Whenever 5 or more damage would be dealt to Fright Train, reduce that damage by 2. At the end of the villain turn, Fright Train regains 1 HP.
Art: Fright Train chained to a wall with tubes connected to him;
Flavor text: "You were powerful. But I shall make you unstoppable!" - Baron Blade, Exordium #2

At the end of Fright Train's turn, destroy 1 Hero equipment card. If KNYFE is active in this game, reduce damage dealt by Hero targets by 1.
Art: A closeup of Choke;
Flavor text: "Cute Toys. Playtime's over." - Choke, Vengeance #4

At the end of Fright Train's turn, this card deals the Hero target with the highest HP 2 lightning damage. If the Visionary is active in this tame, Villain Ongoing cards are indestructible.
Art: A closeup of Major Flay;
Flavor text: "Your tricks will not save you. Our might is undeniable!" - Major Flay, Vengeance #5

At the end of Fright Train's turn, this card deals each Hero target 1 melee damage. Then, if Nightmist is active in this game, this card regains 1 HP.
Art: A closeup of Man-Grove;
Flavor text: "More than mere trees, now you serve the great Baron Blade in pursuit of revenge!" - Baron Blade, Exordium #3

At the end of Fright Traini's turn, this card deals the 2 Hero targets with the highest HP 1 energy damage each. Increase damage dealt by this card by 1 for each active member of the Sentinels.
Art: A closeup of the members of the Crackjaw Crew;
Flavor text: "Yeah, we could take it easy. But that doesn’t sound fun, does it?" - Ember, Exordium #2 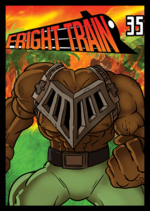 Tyler Vance and Steven Graves enlisted on the same day, and from the first time they met, they knew they would never be friends. The 6'2" Graves towered over the 5'8" Vance, and he never let him live it down. They constantly competed for the top spots and highest accolades in boot camp, and their competive nature often resulted in both of them getting demerits.

After boot camp, Vance and Graves were assigned to the same platoon, and they were ready to continue their ongoing competition. But when Tyler Vance was promoted to Lieutenant and put in charge of the platoon, Corporal Graves resigned himself to respecting his authority, however begrudgingly.

When Lt. Vance's platoon was under heavy fire in the Middle East, Corporal Graves was seriously injured, and Lt. Vance risked his life to get Graves to safety. The two of them were stuck under scant cover for over four hours of heavy fire before they could rejoin the rest of the troops, and in that time, Graves and Vance made a peace, of sorts.

Upon returning to the United States, Graves was honorably discharged due to his injuries after Lt. Vance put in many a good word for Steven Graves. However, Graves still had trouble finding work for years, and ended up working for a South American druglord doing "security". Quickly making a name for himself in the private security sector, Graves became a hot gun and a rather expensive commodity.

Eventually, Graves was hired by a secret security force, but as part of his contract, he was chemically and mechanically enhanced, making him even more of a colossal force to be reckoned with. He was outfitted with a massive helmet resembling the front of a large train, which led to Graves being called "Fright Train". Unfortunately for Fright Train, in the security force's first mission, the team was decimated, and the few remaining members ended up in The Block.

After several years of incarceration, the dastardly Baron Blade managed to get word to several of The Block's inmates, Graves chief among them. "Come work for me," the Baron offered, "and I'll give you the chance for vengeance you so deserve."

Now, Fright Train serves as Baron Blade's body guard and battering ram, and he has a particular vendetta against the hero known as Bunker…

Sentinels of the Multiverse: Bunker