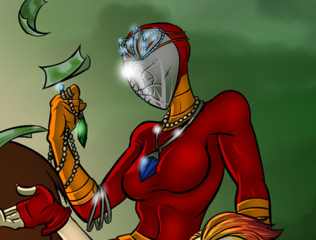 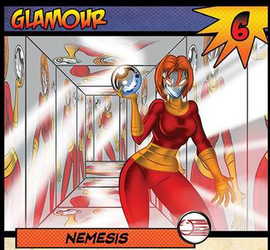 Glamour is a mantle worn by many different people. In the beginning, the title was held by Madame Mittermeier, while she worked her carnival. She used 'magic' to trap souls within the pocket dimension of her carnival. After a while (and a Meta 'mistake' by one of the ficitonal writers) Madam Mittermeier disappeared.

The mantle of Glamour was taken up by Melissa Morris. She is mostly a minor villain through.

Eventually, another took the mantle. During this time there was some uncertainty on who was the new Glamour. It eventually appeared to be Dana Bertrand. A model who was quickly becoming the love interest of Tachyon. Melissa Morris body was discovered, and all signs pointed to Dana being the new Glamour. However, it was revealed that this was another of the illusions that Glamour deals with.

Instead, it was Aislin Allen who was the new glamour. Former member of the Freedom Four/Five as the Shrieker. The readers eventually become privy to her identity, but she's actually very good at keeping her identity secret from everybody in the comics. She's burnt out her shrieking powers (dealing sonic damage), but still has the ability to mess with people's inner ears, making them hear voices or other sounds, throwing her voice, or perfectly mimicking other people which augments her technological illusions. The mask is important here since it covers her mouth and allows her to get away with this stuff (she's not a ventriloquist). Later on, she also manages to track down what happened to the original Glamour's carnival (sans Madame Mittermeier herself - she was already old even back in the Golden Age), figures out how it works, and takes over.

There have been many voices behind the mask of Glamour, but no faces at all. The latest Glamour has more power than any previous incarnation, but with that power comes a sense of desperation. She acts almost as if she has seen what happens when she accomplishes her goals, and it's not what she wanted at all. That said, she openly uses her abilities of misdirection to aid For Profit in their heists and schemes, comforting herself with the benefits of inordinate wealth.

This one is the former Miss Information, Aminia Twain.