Shuffle the Villain trash and reveal the top

cards. Put any revealed Cultists and Relics into play. Put the other revealed cards back in the trash. Play the top card of the Villain deck.
Art: A gathering of cultists in purple robes;
Flavor text: "Your children hear your call, dread Gloomweaver!" - Cult Leader Massey, The Fabric of Despair #4

Strength of the Grave (x1)

Increase Damage dealt by Zombies by X, where X = the number of Zombies in play. Reduce Damage dealt to Zombies by 1.
Art: Gloomweaver standing over two zombies;
Flavor text: "Let the graves of the damned by opened! My servants grow ever stronger!" - Gloomweaver, Nightmist #42

At the start of the Villain turn, each Player may discard 2 cards or destroy 1 of their cards. If they do neither, Gloomweaver deals their Hero

minus 1 Infernal Damage.
Art: The Drum of Despair;
Flavor text: "The rhythm of suffering... it is music to my ears." - Gloomweaver, Nightmist #21

At the start of the Villain turn, each Player may discard 1 card. Then, Gloomweaver deals each Hero Target X Infernal Damage, where X =

minus the number of cards discarded this way.
Art: The Grimoire of Curses;
Flavor text: "Now, children of the gloom, let us meditate on these horrors." - Cult Leader Massey, The Fabric of Despair #1

Reduce Damage dealt to Zombies by 1. Whenever a Zombie enters play, each Villain Target regains

HP.
Art: The Pouch of Bones;
Flavor text: "I can still hear that terrible rattling, and it's been weeks!" - Tony Taurus, Rook City Renegades #13

At the end of the Villain turn, move 1 Zombie card from the Villain trash into play. Then, this card deals the Hero Target with the highest HP X Melee Damage, where X = the number of Zombies in play plus 2.
Art: A woman holding a dagger with Zombies in the background;
Flavor text: "Have you met my friends? They want to meet you,." - The Chosen, Nightmist #20

At the end of the Villain turn, this card deals each Hero Target

minus 2 Fire Damage and

minus 2 Infernal Damage.
Art: Ronway preparing to kill all the heroes;
Flavor text: "You will burn, and you will beg for true despair!" - The Acolyte, Freedom Five Annual #6

Reduce Damage dealt to Villain Targets by 1. Whenever a Target other than this card is destroyed, this card regains

HP.
Art: Deathrattle holding his fists up. His eyes glowing and green orbs around him;
Flavor text: "The gloom of death serves the master in many ways." - Deathrattle, The Fabric of Despair #3

At the end of the Villain turn, this card deals the Hero Target with the highest HP X Toxic Damage, where X =

plus the number of Voodoo Pins in play.
Art: Ophidia the Deceiver;
Flavor text: "She slithers between this reality and the next." - Nightmist, The Fabric of Despair #2

When this card enters play, place it next to the Hero Character with the highest HP. At the end of that Hero's turn, Gloomweaver deals them

minus 2 Irreducible Toxic Damage.
Art: Voodoo doll with a pin through the neck;
Flavor text: "He can reach across the realms to choke the living!" - Nightmist, Freedom Five Annual #6

When this card enters play, place it next to the Hero with the fewest cards in play. At the end of that Hero's turn, that Hero's Player discards a card, chosen randomly.
Art: Voodoo doll of the Wraith with a pin in the left knee;
Flavor text: "Augh! I can't walk! What is happening?!" - The Wraith, Mystery Comics #293

When this card enters play, place it next to the Hero with the most cards in play. At the end of that Hero's turn, that Hero's Player destroys 1 of their cards or Gloomweaver deals that Hero

Psychic Damage.
Art: Voodoo doll with a pin in the left eye;
Flavor text: "Blinded by the vanity of power... " - Gloomweaver, Nightmist #42 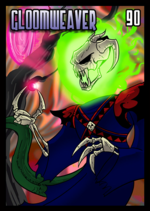 GloomWeaver is an extra-dimensional demon worshiped by many Voodoo cults and primitive tribes. He feeds on the gloom and despair of mankind, awarding dark magic to those who worship him in return for their sacrifices, encouraging them to inflict suffering on the world around them to feed his powers. Although he often sends his thoughts and power into this world for brief periods of time, he has failed to permanently breach the veil that separates him from the feast of desperate souls that our world offers.

But that is about to change. Terrible battles between villains and heroes have grown more frequent over the past few decades - the gloom and despair their battles have wrought have increased his power. Cultists have begun collecting the terrible relics of GloomWeaver: the Pouch of Bones, the Drum of Despair, Grimoire of Curses. If all three are brought together and GloomWeaver is invoked, the seals will be broken! The world’s greatest heroes gather, intent on stopping the demon’s plot, but GloomWeaver is pleased - their strife and anguish will feed his power, and spur his cultists on to bring discord and despair into this world, permanently. And with the heroes defeated, GloomWeaver and his worshipers will be free to spread gloom, despair, and death across the multiverse indefinitely. 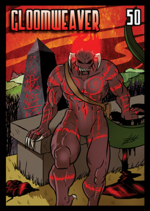 After being sealed back in the Realm of Discord by NightMist and her heroic allies, GloomWeaver could barely feel the emotional flow of the plane of mortals. However, even through the haze, he could feel an intense hatred drift through that world. GloomWeaver had never felt such hatred as that felt by Jack Donovan. So, when the villain known as Spite died, GloomWeaver offered him another chance to wreak havoc, but this time as the right hand of the demon god.

Through Spite, GloomWeaver works to enter this realm in a new way: this time through a vessel of flesh. If Spite succeeds, he will build for GloomWeaver a new body from the corpses of his victims. However, if Spite fails, the dread lord of despair will overtake the shell of Jack Donovan and enter the mortal plane through undead possession! Either way, GloomWeaver is on his way back, and he is more terrifying than ever before!