When this card is destroyed, take all of the Minion cards from the Villain trash and put them into play. At the start of the Villain turn, destroy this card.
Art: Silhouettes of the Gene-Bound Guard, Gene-Bound Soldier and Gene-Bound Shock Infantry, possibly coming out of the Quark-Drive Tanslocator.
Flavor text: "These people are engineered to live and die at my command!" - Grand Warlord Voss, Freedom Five #507

The first time a Minion enters play each turn, play the top card of the Villain deck.
Art: A Circular device with a green passageway in the middle.
Flavor text: "I can safely say that the Thorathians understand quantum mechanics." - Tachyon, Science and Progress One-Shot

This card is immune to Sonic Damage. At the end of the Villain turn, this card deals the Hero with the most Ongoing cards 3 Sonic Damage.
Art: A thin grey alien creating a shock wave by yelling.
Flavor text: The harsh atmosphere of Vdronix resulted in powerful lungs and vocal chords, attributes the Thorathians capitalized on. - Narrator

This card is immune to Toxic Damage. At the end of the Villain turn, this card deals the Hero Target with the lowest HP 2 Toxic Damage.
Art: A black silhouette with glowing green lights, green smoke coming from both hands.
Flavor text: The potential implications of the Mubbloxians' naturally toxic blood delighted Voss's genetic scientists. - Narrator

This card is immune to Fire Damage. At the end of the Villain turn, this card deals the Hero Target with the highest HP 2 Fire Damage.
Art: An alien with craters in its skin a large mouth and glowing red hands.
Flavor text: The Trodcullons were a race of barely sentient volcano dwellers before Voss turned them into his pyrotechnics squad. - Narrator

This card is immune to Cold Damage. At the end of the Villain turn, this card deals each Hero Target 2 Cold Damage.
Art: A white four-legged creature with at least five blue eyes, sharp teeth and long tongue and spike on its shoulders.
Flavor text: The Feethsmar of Gadrion Delta flourished in the frigid temperatures of their homeworld. Then Voss found them. - Narrator

Gene-Bound Ion-Lancer [3] (x2) : This card is immune to Energy Damage. At the end of the Villain turn, this card deals the Hero Target with the lowest HP 2 Energy Damage.

Art: A glowing skeleton wearing armor with a large energy blade on one arm.
Flavor text: The peaceful, agricultural Henathians were massacred by the Thorathian army. The strongest of them twisted into horrid reapers. - Narrator

This card is immune to Psychic Damage. At the end of the Villain turn, this card deals each Hero Target 2 Psychic Damage.
Art: A brain inside what would be the head of a giant mechanical insect, its spinning a web around an unknown humanoid figure.
Flavor text: After the advanced intellectual meritocracy of Piune Prime was utterly obliterated, cerebral matter was recovered to produce powerful psychic exterminators. - Narrator

This card is immune to Lightning Damage. At the end of the Villain turn, this card deals the Hero Target with the highest HP 3 Lightning Damage.
Art: A mutated Maerynian with sharp teeth and a purple tentacle in place of one arm, with lightning charging in both arms.
Flavor text: "I shall see Voss's hideous work undone or perish in the process!" - Tempest, Freedom Five #517

This card is immune to Projectile Damage. At the end of the Villain turn, this card deals the Hero Target with the highest HP 2 Projectile Damage.
Art: A grey alien with a large head wielding two handguns and being protected by a pick energy shield.
Flavor text: The natural hand-eye coordination of the Qubrin made them exceptional marksmen. Voss took what he wanted, destroying the rest. - Narrator

Reduce Damage dealt to Thorathians and Minions by 1.
Art: A Thorathian Soldier holding a flag with grand Warlord Voss' Symbol on it.
Flavor text: "The valiant never taste of death but once." - Tamar, Freedom Five #509

Increase Damage dealt to Hero Targets by 1.
Art: A Thorathian Soldier holding a pistol, on a ship in space.
Flavor text: "Agony is much too time consuming. My primary objective is to kill you quickly." - Vyktor, Freedom Five #512

This card is immune to Melee Damage. At the start of the Villain turn, destroy 1 Hero Ongoing card. At the end of the Villain turn, this card deals each Hero Target 3 Fire Damage.
Art: A spaceship flying through purple and black clouds over a blue and black planet.
Flavor text: "What I cannot have, I will destroy." - Grand Warlord Voss, Freedom Five #510

This card is immune to Melee Damage. At the start of the Villain turn, this card deals each Hero Target 3 Energy Damage. At the end of the Villain turn, shuffle the Villain trash and reveal cards until a Minion is revealed. Put it into play. Put the other revealed cards back in the trash.
Art: A massive ship with many smaller spaceships approaching earth.
Flavor text: "You shall witness the destruction of your wretched little planet!" - Grand Warlord Voss, Freedom Five #512

If you would win the game, flip this card instead.
When this card is destroyed, remove it from the game.
Whenever this card destroys a Scion, add 3 Devastation Tokens to the Inevitable Destruction card.
X on this card = the number of Devastation Tokens on the Inevitable Destruction card.
Reduce damage dealt to this card by X.
At the End of this Villain Turn, this card deals the hero target with the highest HP X plus 1 energy damage. Then, this card deals another scion X minus 1 psychic damage. If there are no other scions here, deal that damage to OblivAeon instead.

At the End of this Villain Turn, play the top card of the Scion Deck.

Flavor text: "This is the end for some. For many, in fact. So, little heroes, which end will you choose?" - Rainek Kel'Voss, Freedom Five #800

When this card flips to this side, it regains

times 10 HP. Then, move it to the OblivAeon play area, and remove the OblivAeon booklet from the game. This card counts as OblivAeon, is immune to its own damage and environment damage, and is not a Scion.
If this card is destroyed, you win! Congratulations!
When a player's hero is incapacitated, that player does not get a new hero. If there are no active heroes, you lose. Game over.
Whenever an environment target enters play, it deals each target

minus 1 melee damage. Then, add 1 Devastation Token to the Inevitable Destruction card and this card regains 9 HP.
At the End of OblivAeon's turn, move OblivAeon to the battle zone with the most hero targets. Then, this card deals each hero target

The Scion with the highest HP deals the Hero target with the lowest HP 10 irreducible Infernal Damage. If no targets are destroyed this way, move 1 Scion from the other Battle Zone to this Battle Zone.
Art: Sky-Scraper and Captain Cosmic looking defeated with Faultless looming in the background.
Flavor-text: "Things look a bit rough, and... well... they are quite bad. I don't know that we can go on." - Captain Cosmic, Prime Wardens #64

The Scion with the lowest HP deals the Hero Character Card with the lowest HP 3 Infernal Damage. Then, if that Hero is not incapacitated, each player discards 1 card.
Art: Nixious entangling Argent Adept in its tentacles.
Flavor-text: "Unhand me, vile fiend! Do not beg the Void to find itself within you..." - The Argent Adept, Scion Strike #4

The Scion with the lowest HP deals the 2 Hero targets with the highest HP 2 Psychic Damage each. Each Hero dealt damage this way destroys 1 of their non-Character cards.
Art: Dark Mind sending her psychic energy through Setback's torso and Expatriette's forehead.
Flavor-text: "The way you care for each other is... touching. I'll take that. It's all mine now." - Dark Mind, Scion Strike #3

Energy Damage and the Hero target with the lowest HP

Move OblivAeon to this Battle Zone. Put the bottom card of the Scion Reserve in this Battle Zone. That Scion deals each Hero target 1 Projectile Damage and 1 Fire Damage.
Art: ObivAeon holding in his hand Borr the Unstable who's charging up with explosive energy.
Flavor-text: "Yes, my master. I will carry this burden until the carrying undoes me." - Borr the Unstable, Scion Strike #4

Destroy 1 non-Target Environment card. The Scion with the lowest HP deals each non-Villain target 2 Psychic Damage. Each player discards 1 card.
Art: A group of citzens looking despondent and apathetic while a shadow of Voidsoul looms over them.
Flavor-text: "There is no hope. Nothing is real but despair. All you have left is your regrets." - Voidsoul, Freedom Five #797 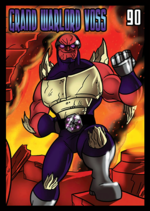 The Thorathian Rainek Kel’Voss was unique amongst his people. The second son of the Thorathian Sovereign, he could have easily secured a powerful diplomatic role and lived a life of luxury on the Thorathian homeworld, Dok’Thorath. To his family’s chagrin, he opted for a military career instead.

His high birth meant that he would never be allowed to serve as a common soldier. He would, however, work his way into commanding an elite strike force: the Nyxian Scourges. Their actions were similar to those of black ops groups on Earth. Their operations took place outside of legal constraints. Their methods were ruthless. And their loyalty to each other was unyielding. While his military career was certainly illustrious, most of it was never officially recognized. But it was his strong predisposition towards genetics that made him truly stand out.

Voss’s official military activity placed him within the Thorathian Ministry of Science. His experiments fostered many advantages for the Thorathian military. He created injectable nanomachines that sped coagulation. He found ways for soldiers to go weeks without sleeping. Ingestible compounds were formulated to increase the rate of muscular growth.

Despite his contributions to the Thorathian military’s might, Voss eventually went too far in his experiments. The Voss family quickly stopped details of Rainek’s transgressions from spreading amongst the general public, but the rumors suggested that he had used live Thorathians for his tests. It was decided that public execution was too great a dishonor for a Thorathian of noble blood, so the decision was made to quietly exile Rainek to Gadrion Delta, a nearby ice planet.

For six years, Voss fought to survive in his icy prison, but using salvaged parts from his transport pod, he managed to continue his experiments. The Feethsmar, a quadrupedal race, native to Gadrion Delta, were his subjects, and eventually Voss’s efforts paid off, leaving him with great legions of the subjugated “frost hounds” fully at his disposal and mindlessly devoted to him.

Over the course of his exile, the soldiers who had served directly under Voss had managed to place themselves within the highest echelons of the Thorathian Ministries. When they finally received an encoded communication from their former leader, they were ready. The Thorathians who had exiled Rainek Kel’Voss, however, were not so ready when he returned to Dok’Thorath with dropships full of Gene-Bound FrostHounds.

Already familiar with the machinations of the Thorathian military, Voss used surprise to his advantage, quickly and systematically taking down major military targets and carving a swath through the Thorathian leaders. Ultimately, he declared himself the new sovereign, Grand Warlord Voss, with the Nyxian Scourges as the base of his power. Grand Warlord Voss was not content to stop with the conquering of his own homeworld. Finally understanding how to bend entire races to his will, he set his course for the stars, taking down planets one by one and adding their inhabitants to his swiftly growing intergalactic army.