Reveal the top 5 cards of Greazer's deck. Put any Hunter Tech cards revealed this way into play. Discard all other revealed cards.
Art: Greazer holding a recently shot gun that has put a hole in bar with the a bartender hiding behind the bar and a green alien girl with him with a drink in hand and phone in the other;
Flavor text: "That Greazer, he's a real cool cat. That's what they all say, right?" - Greazer, Cosmic Concurrence #13

Greazer deals each Hero target in the play area with the Contract card 3 melee damage. Shuffle Greazer's trash into his deck.
Art: Greazer swinging his guitar and shattering a Bee Bot;
Flavor text: "Time to hit the dance floor! Get your boots on, daddy-o!" - Greazer, Freedom Five #677

This card is Indestructible and cannot leave this play area until Greazer is incapacitated. If there are ever no active Hero character cards in this play area, incapacitate Greazer.
Art: Greazer on a payphone with Sky-Scraper in her tiny form captured in a container;
Flavor text: "Come on, come on! I got bills to pay, people. Let's get this done!" - Greazer, Cosmic Concurrence #18

When this card enters play, put it in the play area of the player with the most cards in hand. Then, this card deals each Hero target in this play area 1 lightning damage. Reduce damage dealt to Greazer by targets in this play area by 1.
Art: Greazer cuffing Captain Cosmic with his electroshackles;
Flavor text: "Cosmic bounty hunter? What kind of job is that? Yeeargh!!" - Captain Cosmic, Prime Wardens #21

When this card enters play, put it in the play area of the Hero with the highest HP. At the start of that Hero's turn, this card deals each target in this play area 1 sonic damage and 1 energy damage.
Art: Greazer hitting the H.Y.P. displacer causing a massive soundwave to come out the back;
Flavor text: Work, you bucket of bolts! Or I'll leave you in some square diner!" - Greazer, Cosmic Concurrence #15

At the start of Greazer's turn, this card deals the target with the highest HP in the play area with the Contract card 5 sonic damage. Then, destroy 1 Ongoing card in that play area.
Art: Greazer leaning against a wall in front of the Pink Lady;
Flavor text: "This pretty little peashooter will leave a good impression every time!" - Greazer, Freedom Five #677

This card is Indestructible. Whenever this card is dealt damage, Greazer deals the source of that damage 2 melee damage. At the start of Greazer's turn, if this card has 0 or fewer HP, Greazer deals himself 3 psychic damage. Then, restore this card to 4 HP.
Art: Greazer combing his fabulous hair;
Flavor text: "A hair outta place? That's a real bring down. No way, no how." - Greazer, Cosmic Concurrence #13

This card is immune to melee damage. At the end of Greazer's turn, this card deals each target in the play area with the Contract card 2 projectile damage and 2 energy damage.
Art: An image of Greazer's sweet spaceship the Pink Lady;
Flavor text: "She's a real mean machine. An unreal screamer! You can't touch the Pink Lady." - Greazer, Freedom Five #676

At the end of Greazer's turn, this card deals the non-Villain target with the highest HP 4 energy damage. Then, if Parse is active in this game, destroy 1 Environment card, 1 Hero Ongoing card, and 1 Equipment card.
Art: An image of Rahazar;
Flavor text: "Those who stand in my way will not stand at all." - Rahazar, Cosmic Concurrence #14 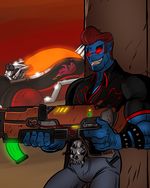 Greazer Clutch was your above-average star-hopping bounty hunter. Heck, he still is! You need a target tracked down, you talk to Greazer. He will find them and bring them back to you. Mind you, this daddy-o costs top dollar. But he is worth it, don't you doubt it. Now, he's had some wacked out contacts lately, but their green is good! So, he's rounded up a posse and they're headed to that planet they call "Earth". What a name, am I right? Anyway, plenty o' high-price targets to be had there, and the getting is good. He's got all manner of heroes in his crosshairs, but he's not too picky - all the the heroes he can grab are going back to the stars for the sake of Greazer's pocket.