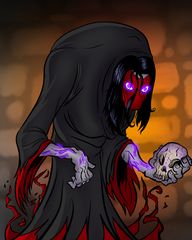 Though frail, Grudge can absorb the lifeforce of living creatures, making him a terrible threat at close ranges. Besides leaching the energy and power of anyone he touches, he is also curious to a sinister degree - his contorted intelligence drives him to learn just what everything is made of.