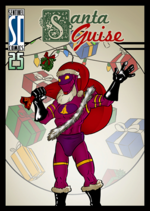 Santa Guise is coming to town! He's decking the halls AND decking villains right and left! He has presents for all of his friends, but you can only unwrap them when he says it's OK, so you'd better be on his "Nice" list! And beware: if Guise is incapacitated, the dreaded Green Grosser will enact his latest plot, ushering in his War on Christmas!

When the dastardly Green Grosser declared War on Christmas, Guise knew he had to become the champion that no one knew they needed. Guise himself was not enough - he had to be more. More powerful. More heroic. More jolly. Taking the mantle of his greatest hero, Joseph King became Santa Guise!

Now, Santa Guise is all that stands in the way of the team of ne're-do-wells who wage war as each holiday. But is his holiday cheer enough to save Christmas Day?! 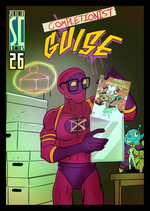 Variant: Originally revealed during the OblivAeon Kickstarter as the $150k stretch reward.

Guise knows how important it is to keep everything pristine. Sleeved cards, bagged and boarded comics, action figures still in their original packaging - heaven forbid anyone ever actually play with them!

Completionist Guise has everything, but will he ever share? Not likely. Those are HIS. Get your own.