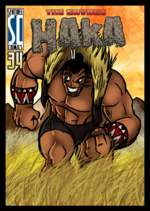 Aata Wakawarewa has gone by many names throughout his life. Most roughly translate to descriptions of his great prowess in battle. Aata, the Bold. Aata, the Fierce. Aata, the Mask of Death. Aata’s indomitable fury took on an almost legendary air - his feats so great that many believe him a myth. His proudest name, however, was Ariki, the chief of his tribe.

Aata led his tribe for many years. He bore them through drought and famine. He brought honor to them in times of peace and times of war. He held strong against foreign invaders, protecting his people’s traditions from outsiders. For years, he was honored by his people as the greatest leader the Maori had ever seen.

However, Aata’s great power is what eventually laid him low, bringing his reign to an end. One morning, after the night of a great battle, his Tā Moko, the facial tattoos identifying him as a Maori warrior, faded completely. Though they knew not what Aata could have done to displease their gods so thoroughly, they took it as a sign that their once great chief had been cursed. Aata’s own right hand man, Ruru, stepped up to challenge him in order to cleanse their village of his taint. Outwitting the giant warrior, still stunned from his tribe turning against him, Ruru dealt Aata a killing blow. Ruru dragged his former friend’s body into the desert, slit his throat, and left him to the dogs.

But this was not to be the end for Aata Wakawarewa. He awoke the next morning with his body restored and stronger than before. To the shock and dismay of his tribe, Aata reappeared at the edge of his village where he called out the new chief, Ruru, and easily struck him down in unarmed combat. He looked out to his people expectantly, thinking they would honor his victory and accept him as their chief again. Instead, Aata was given some new names. Aata, the Damned. Aata, the Other. Aata, the Salted Earth. They spat on him, shouting curses and driving him from the village.

Exiled and without a people, he spent decades wandering. No village would take him - new stories had been told. No longer was Aata the great legend, but a demon. And so he fought for survival, facing the perils of the wilderness alone. Each wound mysteriously made him stronger and, after a time, he was more powerful than even the man of the legends told so long ago.

One day, he finally stopped wandering. His tribe no longer existed to take him back, and his redemption would have to come from his own eyes. But as a warrior and a defender of the people and their traditions, all he knew was battle. Aata finally gave himself a name, Haka, after the war chant of the Maori people, and he carries that name into battle as he fights for honor, not just for himself, or for his people, but for the world itself.