Put 1 token in the hero favor pool when any of these things occur:

If the hero favor pool ever has 20 tokens in it, the heroes win.
Put 1 token in the Bloodsworn favor pool when any of these things occur:

If the Bloodsworn favor pool ever has 20 tokens in it, the heroes lose.

Play the top card of the Title deck whenever any of these things occur:

* The start of the villain turn
* Whenever a target is destroyed

Shuffle the villain trash and reveal cards from the top until 2 gladiator cards are revealed. Put them into play. Put the other revealed cards back into the villain trash. Then, if Kaargra Warfang is not a target, flip her character cards.
Art: A kneeling Dymkharn. Behind her, in the shadows, stands Kaargra Warfang.
Flavor text: "There is fight in you yet! Let's go make one last show of it." - Kaargra Warfang, The Hero in the Arena #6

Each player destroys one of their ongoing or equipment cards. Flip the top card of the title deck and put it under the villain target with the highest hp with the title effects still visible.
Art: Kaargra Warfang holding her hand out the the thumb facing sideways.
Flavor text: "You made your plea. Your words have been heard. But now, it is time for action!" - Kaargra Warfang, The Hero in the Arena #1

tokens from the favor pool with the most tokens to the favor pool with the fewest tokens. If both pools have the same number of tokens, each target deals itself 1 psychic damage.
Art: Different alien races cheering aggressively. A flag with a thumbs-down logo can be seen.
Flavor text: "They can turn on you in the blink of an eye! Such is the game!" - Kaargra Warfang, The Hero in the Arena #5

At the end of the villain turn, this card deals the hero target with the lowest HP 2 fire damage. A target dealt damage this way cannot deal damage until the start of the next villain turn.
Art: A towering alien wielding a scythe-in-chain.
Flavor text: "Stand tall, little one. You are about to have the honor of falling to the Ashclaw!" - Ashclaw R'velos, Freedom Five #709

At the end of the villain turn, this card deals the 2 hero targets with the highest HP 3 lightning damage each. Whenever this card is dealt damage, this card becomes immune to damage until the end of the current turn.
Art: Dymkharn wielding 2 swords glowing with blue-ish energy.
Flavor text: "You look pretty quick. Excellent. I hate boring fights." - Dymkharn the Fearless, Freedom Five #709

At the end of the villain turn, this card deals each hero target 1 energy damage. If multiple hero targets are dealt damage this way, add

minus 1 tokens to the Bloodsworn favor pool.
Art: Idesa holding two green glowing whips.
Flavor text: "Once you've tasted this sort of power, you can never turn back." - Idesa the Adroit, Freedom Five #710

Reduce damage dealt to this card by 1. At the end of the villain turn, this card deals the hero character card with the most cards in play

minus 2 melee damage.
Art: An alien pangolin wearing helm with the Bloodsworn crest, holding a spear on one hand.
Flavor text: "I sense your steps. Wander a bit closer, heavyfoot!" - Impassable Andolin, The Hero in the Arena #5

At the end of the villain turn, this card deals the hero target with the highest HP

minus 1 melee damage. Then, add 1 token to the Bloodsworn favor pool for each environment card in play.
Art: A blue alien and two boar-like creatures with a vine-like one-eyed creature attached to the three.
Flavor text: "Hello! We are normal beings with skeletons, just like you! Let us share a welcoming hug!" - The Hiveminded, Tome of the Bizzare #41

The first time a villain target other than this card would be dealt damage each turn, redirect that damage to this card. At the end of the villain turn, this card deals the hero target with the highest HP 2 melee damage.
Art: A four-armed purple gorilla holding a pair maces in one side and a pair shield with the Bloodsworn crest on the other.
Flavor text: "Next up: "he's big! He's mean! He's furious! It's the Provocator!" - Bloodsworn Colosseum Announcer, Tome of the Bizzare #41

Whenever a non-villain target enters play, this card deals that target 2 sonic damage. At the end of the villain turn, this card deals the hero target with the second highest HP 2 sonic damage.
Art: A red haired female shooting while riding a flying chariot.
Flavor text: "All things move. All things fail. You have no hope of escape." - S'sdari the Bloody, The Hero in the Arena #4

At the end of the villain turn, this card deals the H minus 2 hero targets with the highest HP 1 fire damage, 1 cold damage, and 1 toxic damage each.
Art: A three-headed alien dinosaur.
Flavor text: "Um, just a quick warning. That big lizard thing is still here." - Parse, The Hero in the Arena #3

When a player plays 3 cards in 1 turn, put this card under that player's hero character card, covering everything above this line: The first time this target is dealt damage each turn, play the bottom card of their deck.
Art: Tachyon in a gladiator armor wielding a shield and a katar.

After a target destroys a target without dealing damage to it, put this card under the surviving target, covering everything above this line: Whenever this target reduces another target to 3 or fewer HP, destroy that target.
Art: Argent Adept wearing a bone-and-leather inspired armor.

When a target deals itself 3 or more damage in one turn, put this card under that target, covering everything above this line: The first time this target is dealt damage each turn, this target regains 1 HP.
Art: K.N.Y.F.E. in a gladiator armor wielding a spear.

When a target enters play, put this card under that target, covering everything above this line: Reduce damage dealt to this target by 1.
Art: Tony Taurus hiding behind a wall from Ashclaw R'velos.

When a target destroys 3 targets in one turn, put this card under that target, covering everything above this line: Damage dealt by this target is irreducible.
Art: Tempest wielding a sword.

When a target deals damage to multiple hero targets and multiple villain targets in the same turn, put this card under that target, covering everything above this line: Increase damage dealt by this target by 1.
Art: Char surrounded by green waves.

When a hero destroys a target using their innate power, put this card under that hero character card, covering everything above this line: Increase damage dealt by this hero's innate power by 2
Art: Chrono-Ranger wielding a pistol with his shirt off. A gladiator bleeds green blood in the background.

When a target damages another targets that has a damage reducing effect, put this card under that target that dealt damage, covering everything above this line: When this target deals damage to a target, increase the next damage dealt to that target by 2.
Art: A close-up of Expatriette wielding a sniper rifle.

After a target is dealt 6 or more damage in one turn, put this card under that target, covering everything above this line: If this target would be reduced to 0 or fewer HP, it instead regains 6 HP and destroys this card.
Art: Haka wielding a mace. Behind him stands Tyragon-Rex. 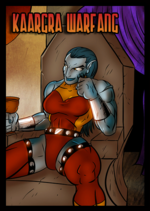 No one knows for certain where the Bloodsworn Colosseum originated. Other than Kaargra Warfang, that is. Some say that Kaargra was a gladiator in the arena until she single-handedly overthrew the original owners of the colosseum and took control for herself. Others say that Kaargra struck a deal with some unfathomable cosmic entity, trading the portion of her soul that knew of mercy and kindness in exchange for power and a realm of her own, which manifests in the form of the Bloodsworn Colosseum. Others still paint Kaargra as a spoiled child of a rich family who used her family’s wealth to build the arena and invent the technology necessary for it to be able to translocate from one system to another.

All rumors aside, no one truly knows the origins, and Kaargra seems disinclined to speak of anything other than the thrill of battle and the glory to be won as a Bloodsworn.

The Bloodsworn Colosseum moves from place to place, seemingly at random. Wherever it lands, Kaargra Warfang holds court. She presses any local inhabitants or creatures into service as gladiators, fighting for the crowd’s favor. Gladiators who do survive and do so in a way which impresses Kaargra are offered a chance to become one of the Bloodsworn - warriors who are bonded to Kaargra by their very blood. Many have chosen this path, as it is a path of prestige and glory, though none of the Bloodsworn survive for more than a few years.

The Bloodsworn Colosseum could appear anywhere, and any heroes around will be forced to fight for survival! Fighting in the arena will surely change a hero…

But it is not enough to merely survive the arena. Without gaining the approval of the crowd and of Kaargra herself, the fate of anyone trapped in the arena is sealed!

Are you prepared to fight for your freedom?