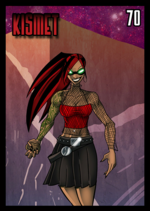 For countless generations, the Adhin family has been blessed with uncanny luck. The sons and daughters always found loving husbands and wives, the family farming business always seemed to have exactly what goods were in highest demand that season, and when a deadly disease was plaguing the town, it was an Adhin who noticed that a stray cat which had drank from the well was now dead.

The Adhins believed the source of their good fortune was a small talisman they'd been passing down over the years as a family heirloom. It was thanks to this, they claimed, that they could always find the best uses for their talents.

That is, up until Gabrielle Adhin. Ever since childhood she had felt odd, indistinct sensations from time to time. Like she was moving in a hundred different directions at once, but in directions there were no words for. When she inherited the charm, suddenly it all made sense. In her mind's eye, she saw countless, branching possible realities, all different. In time, she used the charm to hone her psychic abilities, learning to bend the miasma of minute possibilities to her will.

Within a few years, Gabrielle Adhin, the black sheep of the Adhin line, had carved a swath through reality, playing her mind games on the unsuspecting people around her, and taking whatever she wanted. In and out of The Block more times than F.I.L.T.E.R. would dare to admit, Gabrielle now laughingly calls herself Kismet, and bends the power of her family’s talisman with her powerful abilities in order to not just positively influence her own fortune, but to jinx those who stand in her way! Kismet does as she pleases and has little regard for the fate of others. All existence is her playground, and even when her trickster ways are momentarily halted, she always seems to weasel her way back into her chaotic escapades.

Variant: Originally received in the final release of the Over-Sized Villain card pack.

The miscreant known as Kismet has had many run-ins with the heroes of the Multiverse, through many different realities, Timelines, and dimensions. Now, once again recently out of the Block, she has found her way to a bizarre location indeed: an arcane carnival with a malevolent purpose of its own. With her seemingly innate understanding of the twisting madness behind Madame Mittermeier's Fantastical Festival of Conundrums and Curiosities, Kismet has figured out not just how to manipulate the midway, but also force her focus of fortune upon any heroes who hope to defeat her.

Using the Adhin talisman as a weapon and fighting in one of the most unstable physical locations in this reality, Kismet is a far greater foe than ever before. Will she get away large-scale petty crime, or will the heroes apprehend her once again? Only the twist of time will tell!