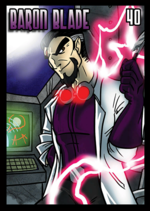 After the second world war, Europe was split into two. Western Europe remained a confederacy of sovereign nations, but Eastern Europe became a part of the superpower that was the Soviet Union. As the tensions between communist and capitalist nations grew, the world eventually found itself in a new kind of conflict: an arms race that would come to be referred to as the Cold War.

The primary conflict was between two rival powers: the U.S.S.R. and the United States of America. The U.S. had a unique advantage in the form of a remarkable uptick in superhuman individuals. Without such a genetic blessing on their side, the Soviets were forced to use technological advancement to keep up. The best minds were conscripted into the weapons development program. The most prominent among them was Fyodor Ramonat.

A Lithuanian super scientist, Ramonat was placed in direct command of a weapons research and development plant outside of a town near the Latvian border called Mordengrad. His research would eventually gain the attention of the U.S. military, and when Fyodor’s team completed the creation of their crown jewel, an orbital shrink ray that could reduce any target on the planet to one percent of its former size, and were preparing to use it, it was time for the Americans to take action.

Unwilling to create an international incident, the U.S. sent in a team of its top superhumans, led by that generation's Legacy. The ensuing battle proved devastating for both sides. Most of the heroes sent to fight were gunned down by the legions of mechanically enhanced Soviet soldiers at Ramonat’s disposal, and Legacy himself was nearly bested by Ramonat’s remote-controlled walking tank. However, Legacy managed to find Ramonat in his command center and stop him. Weakened by the fighting, the factory collapsed in on itself, and Legacy was the only one seen escaping from the burning wreckage.

Mordengrad ended up paying the price for the destruction of the weapons plant. With no need for its workers, the Soviet command made the decision to redistribute supplies and rations to more strategic population centers. Its citizens were forced to wait for hours in the breadlines, often coming home empty-handed. Among those with tattered lives were the remnants of the Ramonat family. Fyodor's widow, Edita, died from a combination of the awful living conditions and a broken heart, leaving young Ivan Ramonat to fend for himself at the age of 13. Many of those Ivan grew up with and around starved; only the most ruthless or the most clever survived.

Ivan fell firmly within the latter category. Like his father, he was brilliant. Instead of focusing on trying to scrounge for food himself, his goal became to gain a following to do the dirty work for him. His plan was to re-open the plant, and those to whom he explained his plan were ready to do anything that might restore the town’s favor. He amassed a large following of men who acted both as body guards and servants.

Over the years, Ivan gradually became the unofficial ruler of the Mordengrad. Hardened by necessity, he reigned with an iron fist. Its people were either with him or against him: there was no in-between. And those who were against him either were persuaded otherwise or were dealt with personally.

Rumor quickly spread once Ivan and his men managed to restore production at the plant, and when the Soviet generals arrived to investigate, production had far surpassed that of when Ivan’s father was in charge. The generals obviously had questions about who the mystery person was and how he had managed such a feat, and when he met with them, Ivan finally executed his plan.

The man they spoke to was no longer the son of Fyodor Ramonat; he was Baron Blade. More importantly, he revealed to the generals that the plant and the weapons within were all his. And when they objected, he led them to the window, showing them the now empty courtyard where their troops once had been. The soldiers had been vaporized, he explained, as would be the Soviet generals and anyone else who stood in his way.

Ivan, now known as Baron Blade, held no actual animosity towards the Soviets. As a self-appointed ruler himself, he understood the need for tough decisions, but he would never again allow himself to be subject to the whims of another. The Parsons family, however, were a different story. The Legacy line were directly responsible for the destruction of the plant and the death of Fyodor. The Soviets were driven from the surrounding lands out of necessity, but the Parsons would have to pay.

As the Soviet Union fell, Baron Blade’s legions grew in size. His nefarious plans grew ever more cunning as well. Blade eventually succeeded in avenging his father by killing the Legacy that defeated his father, but not before the powers of the younger Paul Parsons began to manifest themselves. Unlike his father before him, the next Legacy would prove a much greater nemesis: his new power took the form of impenetrable skin. Numerous attempts to destroy this new Legacy were continually thwarted until he unleashed his greatest plan yet. Instead of trying to fight Legacy himself, Blade would destroy the very world around him, leaving no quarter for the hero and Blade as the ruler of the meager remnants. Knowing what he had to do, he set about building his TerraLunar Impulsion Beam, a device which would pull the moon into the Earth

Variant: Variant for Baron Blade Villain, Originally teased in the Rook City Kickstarter, and revealed in the Infernal Relics kickstarter as the $47K stretch reward

After the destruction of his TerraLunar Impulsion Beam at the hands of his nemesis Legacy, Baron Blade narrowly made his escape from the Freedom Five. Now, he has returned, but without the devices and minions he usually employs to distract the heroes. This time, the Baron has hidden bombs throughout the city of Megalopolis and is threatening to blow the entire city sky high if the heroes do not disarm the bombs in time.

The Mad Baron has sent video footage of his bombs to the Freedom Five headquarters, giving them the clues they need to find and dispose of the explosives. What maniacal plan does this madman have up his sleeves, and when he reveals them, will the heroes be able to save the city, or will they be caught in Baron Blade's twisted trap?

Baron Blade has suffered greatly at the hands of the so-called “heroes” of the Multiverse. His brilliance has always been met with unnecessary physical force. The Freedom Four blew up his amphibious robot, which was specially designed to drill into the core of the earth and harness the power there to power the Baron’s inventions. The Freedom Five attacked his TerraLunar Impulsion Beam Platform, destroying his invaluable and nigh-irreplaceable inventions, leaving him to burn in the wreckage. When he decided to bring the fight to the heroes himself with a combined bombing and death ray plot, the Freedom Five largely ignored him as other heroes dismantled his bombs and physically assaulted him. It was far too much for a scientific genius to stand!

So, the accomplished inventor went into hiding. He began carefully reverse engineering his most dastardly invention: the regression serum, the very mixture he developed to deny Legacy the strength of his own genetic line. His tests, however, were disappointing. He went through hundreds of test subjects with a 0% survival rate. Baron Blade was getting desperate, until he received reports from one of his testing facilities that one plucky test subject had not only survived the test, but had actually developed rudimentary physical powers as a result! This was a great breakthrough, but it came with a notable setback. The subject had escaped the testing facility.

After a frustrating lack of luck in reappropriating the subject, Baron Blade continued experimenting, based on the success of the recent testing, and finally, desperate for results, tested the most promising version of the progression serum on himself! The injections almost incapacitated him, but he recovered quickly and found that he was, in fact, stronger than ever! His strength and speed quickly advanced to superhuman levels, but without regular injections of the serum, using his new power would drain him, leaving him entirely exhausted. Still, his success bolstered his resolve. It was now time for vengeance.

Baron Blade went about gathering villains to him from across the Multiverse. He built an elite team to rival that of the Freedom Five, making himself the leader of the newly formed Vengeful Five, and gave each of his new accomplices command of the other villainous riffraff that heard the Baron’s call.

Now, stronger than ever, Baron Blade and his team are ready to take on the Freedom Five and take the Multiverse back for themselves! Vengeance is upon us!

Ivan Grigori Ramonat is more commonly known as the villainous mad scientist Baron Blade. He has faced the many heroes of the Multiverse in countless conflicts, each time with a new Doomsday plot that is as dangerous to the Baron as those around him.

However, with OblivAeon’s assault on this reality, the mad Baron must put aside his long-standing enmity with the heroes, especially the Parsons family.

Baron Blade has learned much from his conflicts with the heroes, and his inventions have never been better! As Luminary, he stands alongside many powerful heroes and shows them the true might of his brilliance!

Variant: Originally revealed during the OblivAeon Kickstarter as the $175k stretch reward.

In an alternate dimension, there never was a Baron Blade. Instead, young Ivana Ramonat was the hero of her people!

Luminary was a brilliant inventor who fought against the villainous scourge: Legacy of Destruction. When NightMist became a gate between realities, Luminary was one of the heroes to answer the call and join the fight against OblivAeon!