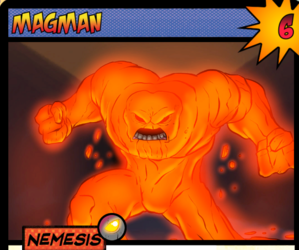 He was actually a criminal who was exiled for stealing lava crystals (which is their "food"). The crystals take a long time to form and are carefully cultivated, but "Fred" took three when he was supposed to just take one and so they kicked him out (from a human perspective it's a surprisingly straightforward affair: Shamans - "You have taken more than your share. You must leave." Fred - "That is true. I will leave."). Once on the surface, he's basically constantly dying given the changes in the environment compared to what he's used to (colder temperatures, different gravity, etc.) which explains why he's weaker than his fellow Magmarians. He's got to keep himself going with whatever crystalline "food" he can get. He could do well for himself for a while if he were to just find a quartz mine or something, even better if he could get set up with a scientist somewhere who's cultivating crystals in a lab, but given that RevoCorp is the group that got their hands on him immediately, they're not going to be so altruistic and instead hire him out.He thinks that these guys are his friends who are helping him get food.