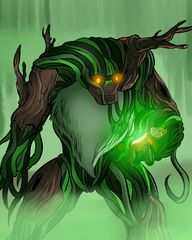 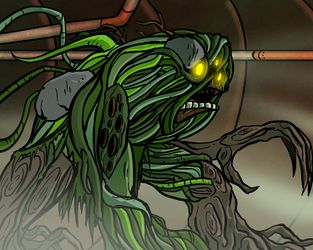 After Baron Blade organized the Vengeful Five to take on the Freedom Five and their allies, the living vegetation known as Man-Grove was thought to have retreated to the far-off land from whence it had originated. In truth, it stayed much closer. 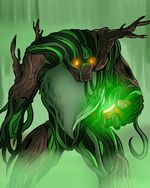 Wounded from battle, it drug itself to a swamp where it hid in pain and fear. Coincidentally, this swamp happened to be not far from the home of young Vanessa Long. She felt the psychic anguish of the creature, and made her way to the swamp. There, she was shocked at the sight of Man-Grove, but still managed to comfort the mind of the semi-sapient flora.

Over time, Vanessa was able to aid the being to become more than just what others saw it as - some monstrous creature. When it came time for Man-Grove to move on, Vanessa gave it a gift. Man-Grove still treasures the stuffed ape as its sole possession.

Exemplar has a bit of a problem. A creature has taken up residence in the Pike Industrial Complex ruins, which serves as the entrance to his subterranean headquarters. Fortunately, For Profit are willing to do a bit of brush clearing.