Each Player must either discard their hand or destroy all their cards.
Art: Absolute Zero's suit melting off as he is shown in pain;
Flavor text: "Be rational, Aminia! He has done nothing to warrant this!" - Legacy, Freedom Five Annual #21

cards are discarded this way, destroy this card.
Art: Miss Information tossing a screw in the air as she walks away from two Bunker suits;
Flavor text: "Gee, I hope this isn't important!" - Miss Information, Freedom Five Annual #21

When this card enters play, put it next to the Hero Character card with the most cards in play. That Hero and that Hero's cards cannot affect or be affected by any other Hero card or effect from another Hero deck.
Art: Tempest surrounded by four villains (Zhu Long, Ermine, and Vyktor are the known villains);
Flavor text: "Uh, Dr. Stinson? Aminia? Anyone? What's going on?" - Tempest, Freedom Five Annual #21

The non-Hero Target with the lowest HP is immune to Damage. At the start of the Villain turn, each Hero Target deals itself 2 Psychic Damage.
Art: Bunker about to be attacked by a mummy behind him;
Flavor text: "I'm sorry, Lieutenant Vance. I forwarded your message to the team; they should be there." - Miss Information, Freedom Five Annual #21

At the start of the Villain turn, each Player may destroy any of their Equipment cards. Then, each Hero Target deals itself

minus X Lightning Damage, where X = the number of Equipment cards destroyed this turn.
Art: Miss Information in the top half with her headset on and Wraith in the bottom half with her malfunctioning Impromptu Invention;
Flavor text: "Well, it is just a hair dryer. Perhaps you blew a fuse?" - Miss Information, Freedom Five Annual #21

Increase Damage dealt by Villain Targets by 1. At the start of the Villain turn, if there are no Diversion cards in play, play the top card of the Villain deck.
Art: Miss Information dragging an incapacitated Tachyon by the hair out of a building;
Flavor text: "Team, I don't know what happened to our stuff. Just act casual." - Miss Information, Freedom Five Annual #21

minus 2 Hero Targets with the highest HP 3 Melee Damage each.
Art: A monstrous cat is about to pounce on the Wraith;
Flavor text: "How could Aminia possibly describe that as a kitty? Doesn't she own, like, four cats?!" - The Wraith, Administrative Assassin #2

minus 2 Hero Targets with the highest HP 2 Melee and 2 Energy Damage each.
Art: A figure coming out of the ground with tentacles grabbing chunks of the road;
Flavor text: "We have got to work on Aminia's communication skills... " - Tachyon, Administrative Assassin #4

At the end of the Villain turn, each Player with 3 or more cards in play must destroy 1 of their cards. At the start of the Villain turn, 1 Hero may discard their hand to destroy this card.
Art: Legacy staring at a fork he pulled out of a microwave with Unity talking to him;
Flavor text: "Ok, I didn't put that fork in there... " - Unity, Administrative Assassin #1

minus 2 Hero Targets with the lowest HP 2 Cold Damage each.
Art: An "Old Lady" with a freezing breath forming ice on the ground;
Flavor text: "We are missing some key intel on this mission!" - Bunker, Administrative Assassin #3

"Threat" to the President (x1)

Reveal the top card of Miss Information's deck. If it is a One-Shot, discard it, and Miss Information deals each Hero target 2 psychic damage. Otherwise, put it into play.
Art: Miss Information showing the Wraith an alternate version of herself;
Flavor text: "There are worlds of differences between what you see and what actually is, Maia." - Miss Information, Freedom Five #680

The Hero target with the highest HP deals itself 3 psychic damage. If that target is a character card, that Hero's player discards their hand, shuffles their trash into their deck, and draws 4 cards.
Art: A large Bugbear is about to strike his claw down on a silhouette of Parse;
Flavor text: "This is not untrue. But it's unright. It's too... left." - Parse, Mystery Comics #491

Miss Information deals each Hero character card 2 psychic damage. Each player either discards 1 card or destroys 1 of their Ongoing cards.
Art: A dazed looking K.N.Y.F.E. standing with Sergeant Steel holding his hand on her shoulder;
Flavor text: "Welcome back to the fold, kid. It hasn't been the same without ya." - Sergeant Steel, F.I.L.T.E.R. #3

Villain targets are immune to damage. At the end of a Hero's turn, if no cards were played and no powers were used that turn, destroy this card.
Art: Freedom Five tower turning into an i shape;
Flavor text: "Much better. First Megalopolis; then, the world." - Miss Information, Reality Defaced #6

Whenever a Hero target deals damage, redirect that damage to the Hero target with the highest HP. Then, destroy this card and play the top card of Miss Information's deck.
Art: An irate Legacy pointing his finger into the chest of angry looking Haka;
Flavor text: "I've had just about enough out of you, mister. You're not even one of us!" - Legacy, Reality Defaced #2

At the end of Miss Information's turn, each player destroys 1 of their Equipment card. If no Equipment cards are destroyed this way, destroy this card.
Art: Absolute Zero on the ground in pain with his equipment broken and smoking;
Flavor text: "Help... me... The air... burns..." - Absolute Zero, Freedom Five #680

Heroes cannot use powers. At the end of each player's turn, that player may play a card. At the start of Miss Information's turn, destroy 1 Hero Ongoing or Equipment card and then destroy this card.
Art: Tempest in a crater as lightning comes down on him;
Flavor text: "You no longer hold the elements in thrall. Just the opposite, in fact." - Miss Information, Reality Defaced #5

If damage would reduce a target to zero or fewer HP, prevent that damage, then destroy this card.
Art: Miss Information reliving her death of being impaled by a part of the building;
Flavor text: "Why not me? Why couldn't you save me? Why?" - Aminia Twain, Freedom Five Annual #21

At the end of Miss Information's turn, destroy 1 Hero Ongoing card. If The Argent Adept, Captain Cosmic, Fanatic, Haka, or Tempest is active in this game, Heroes cannot use powers during turns other than their own.
Art: Balarian with his eye glowing red;
Flavor text: "The beast's smile belies its true nature. So many teeth are rarely a good thing." - The Argent Adept, Prime Wardens #22

At the end of Miss Information's turn, this card deals the Hero character card with the most Ongoing cards in play 1 energy damage and 1 fire damage. Then, if Guise is in play, this card deals 1 fire damage to each Hero target.
Art: The Green Grosser with his cart of fruit throwing an explosive orange in the air;
Flavor text: "You can't trust any fruit now! Every produce aisle could be chock full of cherry bombs!" - Guise, The Banana Game #2

At the end of Miss Information's turn, this card deals the Hero target with the highest HP 2 melee damage. Then, increase damage dealt by this card by 1. If Expatriette, Setback, Nightmist, or Mr. Fixer is active in this game, damage dealt by this card is irreducible.
Art: Heartbreaker with a pencil in one hand and flipping a coin with the other;
Flavor text: "Hey fellas, have you heard the news? Guess who's back in town." - Heartbreaker, Mystery Comics #489

Increase psychic damage by 2. If any of The Sentinels are active in this game, Hero damage cannot be increased.
Art: Judge Mental holding his gavel high in the air with energy flowing from his eyes;
Flavor text: "All truths shall be revealed by the omnipotent mind of Judge Mental!" - Judge Mental, Freedom Five #703 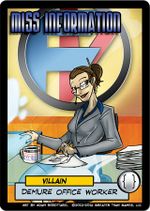 The darkness closed in around her, pressing, crushing, choking. Aminia felt blind panic, like shadowed hands squeezing her desperately thudding heart up again her ribs and then— nothing. Darkness. Silence. And one thought: “They didn’t save me.”

Suddenly, the light hit her eyelids with searing brightness as she snapped into life with a jolt. She gasped for air. “Ms. Twain? Are you alright?” Dr. Stinson asked quickly. “Hiccups?” Mr. Parsons asked in his usual, genial manner. She felt her stomach churn - how did she ever find that phony charisma so charming? She smiled weakly and nodded, feigning another hiccup, before excusing herself from the meeting for a cup of water. Shutting the door behind her, she melted, stunned, on the other side of the wall. The meeting continued on within the room behind her - they didn’t even notice her absence.

What happened? Her eyes darted around the familiar headquarters of the Freedom Five, but not everything seemed like how she’d left it. Things were different. She was different. She had died. The darkness had lifted to unveil a changed world. Or perhaps, perhaps only she had changed? She went to the sink to fill the “World’s Finest Assistant" mug Dr. Stinson gave her three years before they let her die. The handle had yet to crack.

This world was most definitely different than the one she left, but no difference cast such a stark contrast as the difference she felt inside. No longer was she the devoted, sheepish secretary who alerted the Freedom Five to where trouble emerged, who placed orders for Tachyon’s many pairs of new footwear, who copied memos from the president, who washed sweaty spandex uniforms. Now, she was awake.

Aminia straightened up her jacket and opened the door to return to the job she perfected in her previous life. No longer would she skip date night to remove every fleck of red dust from their precious equipment. Nor would she lose sleep worrying about the calls she would make to loved ones with bad news after a battle. For never again would she shed a tear for the Freedom Five. No. For now, all she heard amid the cheer of the grateful crowds and the praise of the adoring public was that one final thought. They had a choice - me, their devoted servant, who gave EVERYTHING … or five total strangers.

“Can they save themselves?” 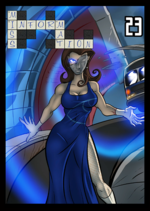 Aminia Twain was the administrative assistant for the Freedom Five for many years, before she was replaced by a version of herself from an alternate dimension. This new version "fell" through the space/time rift when she died, a death which she felt was the fault of her employers: the Freedom Five. Thus, this new, darker, jaded Aminia Twain begain exacting her revenge. However, there was one who saw through her schemes and realized the truth almost immediately: the hero known as Parse. Because of her uncanny ability to see the truth and the flaws of things, she could tell that Aminia Twain was, in fact, the elusive villain know as Miss Information! In a showdown between Parse and Miss Information in the Pike Chemical Plant, a vat of dangerous, untested chemicals was broken, burning and sweeping Aminia away through chemical drains. Her body was never recovered. Now, Miss Information has returned. She no longer fights against the heroes from within the safety of Freedom Tower. Rather, she uses her new unpredictable powers of twisting reality itself to destroy and subvert, and to turn the heroes against each other.