Sentinels of the Multiverse: Mr. Fixer

Incapacitated - An image of Mr. Fixer's hat with a message in Kanji written above it

Mr. Fixer deals 1 Target 2 Melee Damage.
Art: Mr. Fixer punching the Operative in the face;
Flavor-text: "Their eyes beg me for mercy. I grant with my fist." - Mr. Fixer, Transmission of Honor #9

Search your trash or your deck for a Style card and put it either into your hand or into play.
Art: Mr. Fixer sitting on a cliff in the mountains in a meditation. His Hat is hanging on a tree branch behind him;
Flavor-text: "Like a mountain, unmoving, unshakable. Like the ocean, deep, unfathomable." - The Visionary, Freedom Five Annual #15

You may use Mr. Fixer's "Strike" power twice this turn.
Art: Mr. Fixer giving a dragon an Uppercut with energy flowing behind his punch;
Flavor-text: "Strike a blow for freedom, and strike one for the land!" - Mr. Fixer, Mystery Comics #145

Move all Equipment cards from each Hero's trash into their Player's hands. If there is a copy of the card Overdrive in your trash, you may put it into play now.
Art: Expatriette holding a Tactical Shotgun at the back of van with weapons in it;
Flavor-text: "A trip to the junk yard is a journey to the past that makes way for the future." - Mr. Fixer, Transmission of Honor #1

When both a Tool card and a Style card are in play, increase Damage dealt by Mr. Fixer by 1.
Art: Expatriette shooting Blade Battalion members as they coming out;
Flavor-text: "Courage first; power second; technique third." - Black Fist, Mystery Comics #146

Damage dealt by Mr. Fixer is irreducible. When this card enters play, destroy all other Style cards.
Art: Mr. Fixer in his Alternating Tiger Claw stance;
Flavor-text: No Retreat - No Surrender - Unattributed

The first time each turn that Mr. Fixer would be dealt 2 or less Damage, you may redirect that Damage to a Target of your choice. When this card enters play, destroy all other Style cards in play.
Art: Mr. Fixer in his Driving Mantis stance;
Flavor-text: Hard, But Not Stiff; Soft, But With Power; Fast, But Without Disorder - Unattributed

Whenever Mr. Fixer deals Damage, you may choose the type of that Damage. Increase Damage dealt by Mr. Fixer by 1. When this card enters play, destroy all other Style cards in play.
Art: Mr. Fixer in his Grease Monkey Fist stance;
Flavor-text: Attack Suddenly; Attack Violently; Attack Without End - Unattributed

After Mr. Fixer Damages a Target, all Damage dealt to that Target is irreducible until the start of your next turn. When this card enters play, destroy all other Style cards in play.
Art: Mr. Fixer in his Riveting Crane stance;
Flavor-text: Out Maneuver; Out Distance; Out Last - Unattributed

Non-Hero Targets cannot deal Damage. You may not use Powers. You may not draw cards. At the start of your turn, destroy this card.
Art: Mr. Fixer using his Grease Gun to cause ninjas to slip and fall;
Flavor-text: "Being an auto mechanic is not exactly a precise business." - Mr. Fixer, Engine Block Blues #2

When this card enters play, draw 2 cards. At the start of your turn, return this card to your hand.
Art: A green tool box with a rag, pipe wrench, screw driver, and hammer showing;
Flavor-text: "A toolbox is not a toy." - Mr. Fixer, Engine Block Blues #4

Whenever Mr. Fixer deals Damage, he may deal that Damage to 1 other Target as well. Increase Damage dealt by Mr. Fixer by 1. When this card enters play, return any other Tool cards in play to your hand.
Art: Mr. Fixer holding his two crowbars over his head;
Flavor-text: "Yup, one for each hand. Just in case, you know?" - Mr. Fixer, Engine Block Blues #1

Whenever Mr. Fixer deals Damage to a Target, reduce all Damage dealt by that Target by 1 until the start of your next turn. When this card enters play, return any other Tool cards in play to your hand.
Art: A bloody Mr. Fixer has his Hoist Chain wrapped around the neck of a Granite Oni;
Flavor-text: "It's a good old chain. Held up many a block in its day." - Mr. Fixer, Transmission of Honor #6

Whenever Mr. Fixer would deal Damage to a Target, he deals that much Damage to all non-Hero targets. When this card enters play, return any other Tool cards in play to your hand.
Art: Mr. Fixer hitting multiple thugs with his Jack Handle;
Flavor-text: "Never know when you'll need an extra long lever." - Mr. Fixer, Mystery Comics #146

Increase Damage dealt by Mr. Fixer by 1. Reduce Damage dealt to Mr. Fixer by 1. When this card enters play, return any other Tool cards in play to your hand.
Art: Mr. Fixer hitting Zhu Long in the head with his Pipe Wrench;
Flavor-text: "Good forged steel! Not like those modern cast aluminum ones." - Mr. Fixer, Freedom Five #617

All Damage dealt by Mr. Fixer is Projectile Damage. After Mr. Fixer Damages a Target, if that Target has 2 or fewer HP, destroy it. When this card enters play, return any other Tool cards in play to your hand.
Art: Mr. Fixer throwing his Tire Iron;
Flavor-text: "He threw a what at you?!" - The Fence, Justice Comics #634 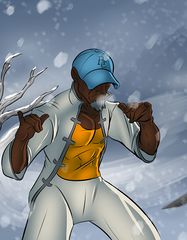 From the Delayed Indefinitely For Profit expansion to Sentinel Tactics

Bitter Strike counts as a Strike 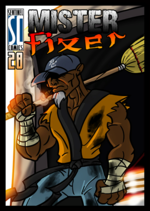 The old mechanic that runs “Slim’s Auto Shop” only answers to “Slim”. There was a time when he went by “H. R. Walker” - everyone just called him “H.R.” back then. But those were simpler times. H.R. used to run a martial arts school for kids, most of whom never paid for their classes, but about 25 years ago, a group of his students were killed for standing up for themselves, gunned down by drug dealers for being in the wrong place at the wrong time. It wasn't even mentioned in the papers. No one cared. H.R. closed down the school the next day, telling students, “The only way to stay safe is to not fight back.”

Now, Slim just runs his auto shop, and everyone in the neighborhood knows it’s the best place to get your car fixed. Slim doesn't use the fancy diagnostic computer like the big shops, but he always gets the cars running better than before, and doesn't charge much at all. Few people even remember that H.R. ever existed, much less the martial arts school.

However, the pushers and dealers are expanding their territory, and there’s been a rash of criminal activity on Slim’s block. He maintains a policy of “Don’t fight back. Give them what they want.” But his shop assistant, Charlie, has been getting pushed around lately by some unsavory thugs, and “Don’t fight back” won’t protect him for long… 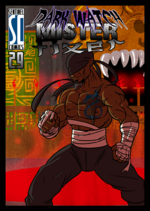 The hero team known as Dark Watch has gone through a lot. They were originally formed by Expatriette, Setback, and NightMist who were seeking to uncover the truth behind the events of the death of their friend, Mister Fixer. So, it was a bit of a rough start that the first major threat to Dark Watch was a mystically revived Mister Fixer! They managed to survive and even helped him reconnect his mind and body, so Mister Fixer became the fourth member of Dark Watch, fighting alongside those who risked everything to save him.

What they found, however, was not exactly what they were looking for. They learned of the death of Mr. Fixer at the hand of his old pupil, The Operative, but his corpse had been sent to the fabled Temple of Zhu Long. The three heroes fought their way to that temple, only to be forced to face in combat the very subject of their search. A resurrected Mr. Fixer who knew not the faces or voices of his former allies fought them at the command of the mystical Zhu Long. In the course of the battle, NightMist managed to reconnect Mr. Fixer’s mind to his body, and the four escaped the temple together.

Now, Mr. Fixer fights as part of Dark Watch. There is much unknown about how he returned, and his body seems to be healthier and stronger than before, but he still experiences great, undying rage. He is a harsher combatant than ever before, and the other members of Dark Watch keep their eyes on Mr. Fixer, both concerned for his safety as well as their own. 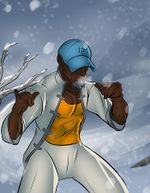 It is not fair to say that Mister Fixer is wise beyond his years, as his strength and vigor belie his (briefly interrupted) century of life. Gone is the undying rage which filled his existence upon his reanimation. No longer a martial arts instructor nor an auto mechanic, "Slim" Walker has become much more serene about his continued existence. Now, he hopes to protect as many people as possible with what time he has left.