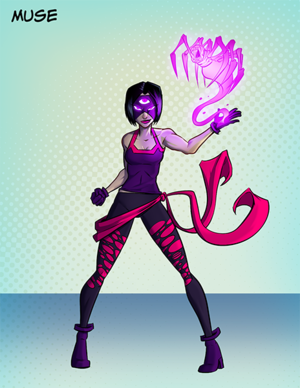 The Dreamer deals each non-Villain Target X Psychic Damage, where X = the number of Projections in play plus 1.
Art: The Dreamer asleep in a bed with physic 'power lines' coming from her head, surrounded by malevolent toys;
Flavor text: "She looks so peaceful... don't be fooled!" - Haka, Nightmare World #2

The Player with the most cards in play cannot play cards until the start of the next Villain turn.
Art: Sky-Scraper laying on the ground, with The Dreamer in front of her projecting psychic 'power lines' (or a tiny The Dreamer and regular sized Thorathian);
Flavor text: "Hrm? Wha? Is someone there? Stop. Just... stop." - The Dreamer, Nightmare World #5

minus 2 Projection cards are revealed. Put them into play. Discard the other revealed cards. Shuffle the Villain trash into the Villain deck.
Art: An Illusory Demon grabbing Ra around the neck, background, Chrono-Ranger and an unknown shadowed character, in a broken city street;
Flavor text: "I've seen a lot of strange things in my days, but this is something else!" - Chrono-Ranger, Nightmare World #3

Increase Damage dealt by Villain Targets by 1. Reduce Damage dealt to Projection cards by 1.
Art: A 'Bizarro' version of Legacy;
Flavor text: "Well, this is certainly odd. I'm not sure how to proceed here." - Legacy, America's Finest Legacy #81

Reduce Damage dealt to this card by 1. At the end of the Villain turn, this card deals the non-Villain Target with the lowest HP 2 Melee Damage.
Art: A Samurai made of stone, background of cherry blossom trees;
Flavor text: "It's sword is sharp, but not as sharp as its form is strong." - Mr. Fixer, Transmission of Honor #6

minus 1 non-Villain Targets with the Highest HP 2 Toxic Damage each.
Art: A humanoid looking man/spider hybrid, poised to leap;
Flavor text: "Beware! This beast is born from dreams tainted by another world!" - The Argent Adept, Virtuoso of the Void #17

Infernal Damage. When this card is destroyed, destroy 1 Hero Ongoing card.
Art: A blue demon, ready to attack;
Flavor text: "Her mind has brought forth demons to lay us low!" -- Fanatic, Fanatic #14

At the end of the Villain turn, this card deals each non-Villain Target 2 Psychic Damage. Whenever a Target other than this card is destroyed, restore this card to its maximum HP.
Art: A man wearing a suit with a skeleton imprint, and a skull for a head, background of a sacrificial chamber at night;
Flavor text: "Where did this guy come from? He gives me the creeps!" - The Wraith, Freedom Five #299

At the start of the Villain turn, this card deals the non-Villain Target with the highest HP X Psychic Damage, where X = the number of Equipment Cards in play plus 1.
Art: A skinny man with glowing red-eyes, sitting on a throne made of alphabet blocks, with toys that glow with the same energy as his eyes;
Flavor text: "This is most disturbing. The very thing I most wanted to avoid." - The Visionary, Mind over Matter #43

At the end of the Villain turn, each Player discards 1 card. Then, this card deals any Hero Character card whose Player has no cards in hand

minus 1 Toxic Damage.
Art: A tiny fairy, eating a bloody tooth with it's sharp teeth;
Flavor text: "Ahh! No! Not OK! I thought fairies did nice things, like granting wishes." - Unity, Nightmare World #1

minus 2 Melee Damage. A Target dealt Damage this way cannot deal Damage until the start of the next Villain turn.
Art: A unicorn with a whip fixed where its horn would be, background volcanoes and rainbows;
Flavor text: Ra: "Why does it have a whip for a horn?" - Mainstay: "For whipping!" - Ra, Mainstay, Nightmare Realm #4

Note: All projection art is The Dreamer's nightmare versions of objects, and as such are not true interpretations of the creatures they represent

When Vanessa Long transported herself backwards in time, her first goal was to save the not-yet-born version of herself. She managed to get her parents out of the clutches of Project Cocoon and kept an eye on the family. When Vanessa Long was born, The Visionary was relieved that it was without an explosion of psychic energy, and that the baby seemed to be normal in all ways.

Six years have passed, and The Visionary has kept an eye on the Long family, but with no signs of complications, the family seems to be out of harm's way. Until one day, when the young Vanessa Long's latent powers manifested very dangerously.

The young girl's thoughts manifested themselves as physical creatures, and the shock of her new awareness of the world shut down her body, leaving Vanessa into a coma.

Sentinels of the Multiverse: The Visionary