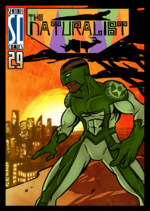 Michael Conteh was a very well known name in industrial development. His early investments led to fast-paced advancement of the Conteh Energy Corporation in Nigeria and, soon thereafter, most of Africa. He worked across multiple levels, ruthlessly undermining competing companies and destroying small communities to get access to their resources. By the time he was thirty, he controlled over 80% of the refineries in the southern hemisphere.

In his early thirties, Conteh began having terrible dreams. Dreams of grasping vines, pulling him down into the earth, and of all manner of animals stampeding through his bones, which turned to the very skyscrapers he’d built. Each morning, he woke to the feeling of his bones reforming themselves, but he put it out of his mind as mere remnants of awful dreams. Until the morning he woke up as a gazelle. Panicked, he crashed through a picture window and escaped into the wilderness, pursued by his own confused guards. He spent months living as a gazelle, unable to determine what had happened.

One day, he heard the sound of soothing drumming, and was drawn to the beat. He found a tall, white man with blazing red hair standing in a clearing, playing a djembe. The man turned to face the panicked gazelle. “Hello, friend,” said the drummer. “You are certainly far from home.”

The Argent Adept went on to explain to the transformed Michael Conteh that he had been cursed by the primal spirit Akash’Bhuta. The musician claimed he could help him return to his human form, but it would take time and a journey. Equally furious and scared, but unable to communicate, the former oil tycoon merely hung his head. The Argent Adept produced a stringed instrument and plucked a dissonant tune. The gazelle felt heavier, and thought he was being lulled to sleep. However, the weight increased even more, and he felt his bones start to shudder and split. With an awful rending pain, his thin furred hide split to reveal a thick, wrinkled, grey skin. He hauled his now ponderous bulk to his newly stubby feet. He was now a rhinoceros. When he realized he no longer heard music, he turned to face where the musician stood, but there was no longer anyone there.

Months passed, until one day, a rhinoceros that vaguely remembered being something both more and less than a rhinoceros heard the trill of pipes. Not a bird, but silvery pipes, played by a tall, red-haired stranger. The Argent Adept had returned, and now played a different tune. The rhino charged at the man, angry at what he didn’t know, but what he knew was coming. However, he feet fell out from under him, throwing him to the ground in a cloud of dust. His form shrunk in on itself, and thick, green plated flesh took the place of his former comfortable skin. The massive crocodile, seething at earth spirits and red-haired men, slunk into the river.

Meanwhile, years had passed since anyone had heard the name Michael Conteh, but his corporations still ran, at the cost of both the environment and a great number of people. So, when a bedraggled Mr. Conteh walked into the corporate headquarters of Conteh Energy and declared it the beginning of the end, most feared the man had gone insane. The controlling shareholders of Conteh Energy quickly kept him from having any legal control of the company, but Michael Conteh was not interested in control. Leaving his name and his company behind, he returned to the wilderness.

The Naturalist now works to protect the environment and the world from those who would destroy or exploit it for their own means. From corporations which bleed the planet dry, to mad scientists who attempt to pull the moon into the earth, The Naturalist has his watchful eye over the world, its resources, and its people, and he has learned a few tricks from his time in the wilderness… 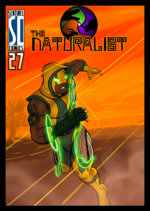 Variant: Originally revealed during the Villains of the Multiverse preorder event.

First Appearance: Virtuoso of the Void #30

Those hunting Michael have drawn ever closer. It's only a matter of time before they catch him. Cornered as he is, the Naturalist has been losing his grasp on humanity, struggling to maintain focus and keep a single, stable form. The Argent Adept found Michael Conteh once again in an inhuman state, but this time, the Naturalist was not a specific animal. Instead, he had the characteristics of several different animals, including animals he had never taken form of before. The musical magician helped his old ally calm and focus his mind, but his form continued shifting. Now, the Naturalist fights those who hunt him, though his powers are in continual flux.