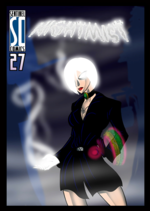 Faye Diamond took over the Diamond Investigations when her father retired. Gaining access to the agency files, she began to investigate the disappearance of her grandfather Joe over 70 years earlier. That investigation took her to Arkham, Mass. and deep into the workings of a coven of witches where she first came face to face with the Occult and magical relics.

During her time with the coven she learned that “magic” is real, and, furthermore, she had a talent for it. The Study of the Occult and magic became an obsession for her until one day a spell went terribly awry - the Mists of R'lyeh backfired! Instead of transporting her to another dimension, it brought part of the dimension into her, transforming her body into incorporeal mists! Overcome with arcane energies, she blacked out. Hours later, when she recovered, she found that she was once again solid. The incident, however, had cursed her forever - parts of her shift from solid to mist in the presence of darkness or shadow.

Only a few weeks later, a wizened Chinese man appeared at the agency, identifying himself only as The Master. He claimed that he had been called by the mists and was here to teach her to handle both her gift of magic and her curse of the mists. Years of training with The Master went by, and yet, he repeatedly insisted that she was still unprepared to face the true terrors of the other planes.

One night, while Faye was poring over the Tome of Elder Magic, there was a rapid, insistent knocking at the door to Diamond Investigations - Tachyon had gathered information about paranormal investigators and had come seeking the help of the best: Faye Diamond. Taking the name “NightMist”, Faye assisted the Freedom Five in turning back the first assault of terror from the villainous entity known as GloomWeaver.

Since that time, NightMist has vigilantly patrolled the shadows of night, seeking a cure for her curse while protecting this world from things that come from the realms beyond our own! 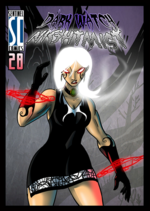 NightMist needed more power to fight the ever-stronger foes she faced. Knowing that vast stores of magical energy drifted untouched just outside our realm, NightMist used her cursed mistform to reach beyond her native plane and harvest that energy. It was easier than she had expected - she reached out into the void and drank deep of the eldritch power she found there. However, when she attempted to return to her mortal form, she found she was lost. She had become a creature more magical than mortal, and creatures such as herself did not exist in the material realm. Magical creatures, however, did recognize her now as one of their own, but also as potential prey.

She fought. The being who was once NightMist fought against all manner of unspeakable, unknowable forms for what must have been years - perhaps centuries. She was strong, and she used her strength to extract information from her attackers. That information led her to a jagged rift between worlds which pulsed open and closed erratically. Dozens of powerful entities fought at that gateway, each striving to be the one who dove through when the portal briefly opened. Striding forward, NightMist swept all of them aside, and took control of the portal, pointing it towards her home. When Faye Diamond reentered familiar surroundings, it had only been a few days since her disappearance. Though the world around her had hardly changed, she was a very different person.

While things deteriorated more and more in Rook City, the heroes who regularly patrolled the failing city grew increasingly concerned about the disappearance of Mr. Fixer. Three of those heroes joined forces: Expatriette, Setback, and NightMist. They worked together to protect Rook City and to investigate the loss of their friend. Without NightMist and her recent power fluctuations, they would not have been able to save him.