Sentinels of the Multiverse: Parse

Incapacitated - Shows Kim Howell in a trance with computer code in her eyes.

Between the Lines (x3)

One Hero may use a power now. If that power deals damage, that damage is irreducible.
Art': Haka about to punch Akash'Bhuta in the eye;
Flavor-text: "Good! Now, five centimetres to the left... perfect. Hit it." Parse - Freedom Five #607

Parse deals 1 target 3 irreducible projectile damage. Draw 1 card.
Art: Ambuscade surprised that an arrow just got shot into his rifle scope;
Flavor-text: "How... I did not see that coming. Merde." - Ambuscade, Freedom Five #702

Reveal the top 3 cards of your deck. Put 1 on the bottom of your deck and the other 2 in your hand.
Art: Parse surprised when a blue alien bug broke through a wall;
Flavor-text: "Whoa, you're quite the... thingamajig. Shoo!" - Parse, Cosmic Concurrence #7

Discard up to 3 cards. Draw twice as many cards as you discarded this way.
Art: Parse in full color with outlines of Expatriette, Legacy, Calypso, and The Radioactivist fighting;
Flavor-text: "Hold on just a tick. That's a lot to process. Okay, got it all." - Parse, Vengenace #2

Select a Player. That Player reveals the top 2 cards of their deck. They may play, draw, or discard each of those cards in any order.
Art: Parse directing all the heroes from the Vengeance expansion;
Flavor-text; "Here's the situation. You know what to do." - Parse, Vengeace, #5

Parse deals 1 Target 1 irreducible projectile Damage. Increase Damage dealt to that Target by 1 until the start of your turn.
Art: Cosmic Omnitron with an arrow in its neck;
Flavor-text; "Only a few clicks away. Shouldn't be too much of a problem." - Parse, Cosmic Concurrence #1

When a villain card would enter play, you may discard it instead and destroy this card. When this card is destroyed, draw a card and play the top card of the villain deck.
Art: Outline of Parse looking at the weaknesses of a giant 3 headed dinosaur alien in an arena;
Flavor-text: "Well, you look like heaps of trouble. No thank you." - Parse, The Hero in the Arena #3

Whenever you discard a card from hand, select a Hero target. Increase the next damage dealt by that target by 1.
Art: Redeemer Fanatic breaking Absolution on Citizen Truth's arm;
Flavor-text: "Adjustments here and there. They add up." - Parse, Freedom Five #599

Whenever a non-hero target enters play, increase damage dealt to that target by 1 until the start of the environment turn.
Art: Parse touching a weak spot on Vine Guy of The Crackjaw Crew;
Flavor-text: "Oh, look. Another one. They just don't make villains like they used to." - Parse, Vengeance #4

Art: Outline of Parse seeing different possibilties of Iron Legacy's next move;
Flavor-text: "You see weaknesses. What do you see before you now?" - Iron Legacy, The Final Legacy #5

Power: Look at the top card of a deck. Put it on the top or bottom of that deck. You may draw 1 card.

Damage dealt by Hero Targets is irreducible. At the start of your turn, destroy this card.
Art: Parse watching Captain Cosmic save The Matriarch from a silver giant;
Flavor-text: "There! Run to the center! It's now or never!" - Parse Freedom Five Annual #29

Power: Discard a card. If you do, you may destroy an Ongoing or Environment Card.

Art: Revenant taking an arrow to the left shoulder and armor breaking off;
Flavor-text: "I think it goes without saying that you're fired." - Revenant, Vengeance #4

At the start of your turn, you may discard 1 card. If you do, you may play a card.
Art: Spite holding a blonde woman hostage while Parse looks at him;
Flavor-text: "What's it going to be? Face it. You're out of your league." - Spite, Mystery Comics #98

Whenever a Villain card enters play, you may look at the bottom card of a deck, then either put it on the top or bottom of that deck.
Art: Parse investigating something glowing red from a broken coffin. Argent Adept and NightMist in the background;
Flavor-text: "Good news: I have new information. Bad news: It's not good." - Parse, Tome of the Bizarre #34 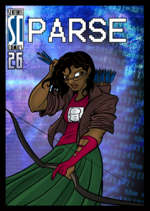 For all the trouble her Asperger’s syndrome gave her in her younger years, Kim Howell prided herself in her ability to focus, to analyze information, and to come to accurate conclusions better and faster than just about anyone else. Her friends and family were unsurprised when she moved quickly from a temporary contract job at the Australian branch of RevoCorp to a full-time data analysis position. Her exemplary work in crunching numbers and delivering results paved the way for her inclusion on a team of code-breakers working on the top secret Omnitron project.

RevoCorp had recovered part of the original Omnitron core and was analyzing its self-altered programming in order to better understand what had happened. They were interested in determining if it were possible to recreate the conditions that had spawned a sentient AI, as well as what steps would need to be taken to prevent future occurrences. Ms. Howell was a key member of the deciphering team working on Omnitron, and was actively monitoring the remaining scraps of live programming when the cosmic event transpired that precipitated the reactivation of Omnitron in its more terrifying form. The overflow of information would have just looked like bizarre nonsense to most people, but Kim followed every bit. She saw like she had never seen before.

The code that rewrote Omnitron also upgraded Kim Howell’s mental capacities, allowing her to analyze everything she saw at a much deeper level. Suddenly, she could see the connections between seemingly unrelated events, the weak-points in structures and in people, even the aftereffects of otherwise unimportant actions. Her real time analysis gave her a chance to prevent great catastrophes or to practically foresee the future. Coupled with her skill at archery, she was able to make a notable difference in ranged situations with pinpoint accuracy.

Given her ability to perceive and dissect information, she took the name Parse when contacted by the Freedom Five, who enlisted her help against the nefarious Miss Information. Only time will tell what part Parse has to play in the upcoming events which will rock the Multiverse to its very core. 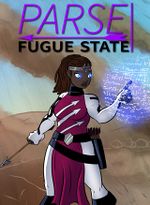 Variant: Originally revealed during the OblivAeon Kickstarter as the $50k stretch reward.

When OblivAeon first approached Earth, a monitoring satellite caught readings of the cosmic being’s ambient radiation. That satellite was being monitored by the hero known as Parse, and encountering the same code that originally “reprogrammed” her mental pathways sent her into a nigh-catatonic state.

Parse had not been seen for much of the early conflict with OblivAeon, but when she did appear, she was not quite the same person.

She no longer carried a bow; instead, she threw her arrows with impeccable accuracy at humanly impossible speeds. Fugue State Parse took no time to explain to her fellow heroes, instead taking the fight to OblivAeon, as she knew the true desperation of their situation.