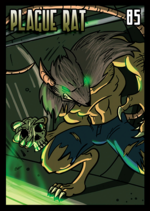 "These crazy stories about some monstrous, rat-like creature living in the Rook City sewers are obviously just urban legends. I've heard people say this 'Plague Rat' drags easy prey, like anyone who goes out at night alone, deep into the sewers! They say the Rat eats some of them; others he infects with some terrible Rat Plague, leaving them to go mad before their terrible death. Do you buy this? I tell you, I knew that some people will believe anything, but this is too much! Sure, the occasional disappearance goes unsolved, and the homeless all swear that entering the sewers is a death sentence, but unexplained disappearances and crazy homeless people are just a fact of life in a such a big city. All the smart people know there’s nothing down there. I mean, come on! How likely is it that a 7-foot-tall creature, half-rat, half-man, lives in the sewers? You and I both know these tales are nothing more than stories to scare kids! People these days. They’ll believe anything they hear!"

Many decades ago, a foul drug-dealer controlled large swaths of the Rook City drug market. He made his hideout deep in the Rook City sewers, keeping his stash safe from competitor and law enforcement alike. However, his criminal enterprise was worn down by a long battle with a new criminal organization taking control of the city. Over time, he was entirely ousted from the streets of Rook City, and lived in the sewers to survive. Years of handling the vile drugs he sold, mixed with the toxic waste from the industrial plants, slowly twisted and mutated the dealer into a giant, hideous, rat-like monster. Now, his last shreds of humanity all but eliminated, he takes the Rook City sewers in search of his next meal, infecting all he touches.

Decades ago, a foul drug-dealer had a hideout deep in the Rook City sewers, keeping his stash safe from law enforcement and competitors. His criminal enterprise was worn down over time by the growing criminal empire known as The Organization, and he was eventually forced to call the sewers his home. Years of handling drugs and living in hazardous toxic chemicals from the industrial plants mutated the dealer into a hideous, rat-like monster who prowled the Rook City sewers, seeking to infect all he encountered.

The creature known as Plague Rat was recently captured by a RevoCorp Recon & Execute team, and has been a subject of much experimentation at the RevoCorp labs. After considerable chemical reprogramming of the monstrous creature, Plague Rat is now a part of the R&E teams on their missions, used as an amped up bloodhound to seek out and destroy key targets. In fact, Plague Rat is currently hot on the trail of a recent RevoCorp lab escapee...

Not-so-deep beneath the ruins of Rook City lurks a creature who has weathered the changes to the surface world. Plague Rat had finally gotten back to his nest just before the fall of Rook City. The sewers were flooded with chemicals from the destroyed Pike Industrial Complex, as well as other bizarre mixtures of unknown origin. These new chemicals interfered even more with Plague Rat's already corrupted system.

As an even more frenzied creature, Plague Rat is rarely willing to leave the broken sewers. When he does, it's to find anything vaguely edible and drag it back down to his nest. The monstrous Plague Rat is even a greater threat than ever before!