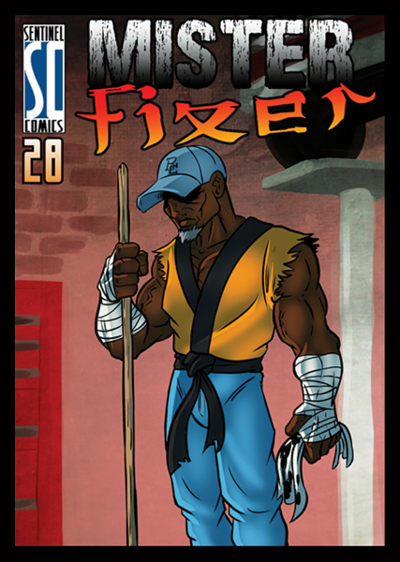 We're doing things slightly differently today: instead of moving through the character's life chronologically, we go in order of what stuff appeared in the pages of Sentinel Comics.

We start by talking about the character Black Fist! This art is the only depiction of Black Fist in the Sentinels of the Multiverse card game. (Hint: In this art, Black Fist is neither Legacy nor the giant green space alien person. He's the other person. The one next to Legacy.)

Twelveish minutes into the episode, we move forward to talking about "Slim" - who then becomes Mister Fixer - he looks like the first image posted above. Just a guy who works in an auto shop.

Around the 18 minute mark, we rewind to actually go into Harry Robert Walker's complete backstory, starting from his youth.

At 19:20, we talk about terrible cities. Adam mentions Baghdad. Turns out, the city with the highest murder rate in the world is Caracas, Venezuela. Which is where Christopher grew up. So, that's cool? No worries, though - we live in St. Louis now. Which is #15 on this list. OH GEEZE.

Around 33:30, the Dark Watch story comes up. When Expatriette, Setback, and NightMist go to the Temple of Zhu Long, this is what they find:

Christopher and Adam talk for almost an entire minute from 35:10 to 36:00 just on the viscosity and taste of the liquid in that vat. You're welcome (to just skip that part of the episode).

I want to apologize right now for the "wolf hunting" sub-plot that happens during the Q&A portion of the podcast. It was not planned, and I really don't know where it came from.

Just after the 65 minute mark, we talk about the art above that depicts Black Fist and Legacy with Jansa Vi Dero. We don't look at the art - just talk about it from memory. Christopher thinks that Legacy's boots do a "flop-over thing". They do not. Adam thinks Legacy is wearing his underwear on the outside. Legacy is not. Both Christopher and Adam were wrong, and are ashamed.

Next week, we talk about The Chairman and The Organization! See you then!