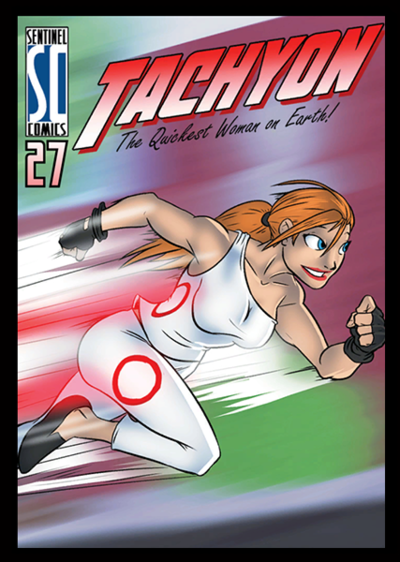 This episode has arrived before it even left!

Three and a half minutes in, we mention that there's an upcoming Freedom Five Episode. We do a lot of, "We'll talk about that in the [some character] episode," so I figured I might as well give you the official schedule through the end of May, at least.

Worry not! We'll still do an Interlude about the upcoming schedule at the end of this month. I genuinely have no idea how many of our listeners read these show notes.

We talk about a couple of Tachyon's interns, Krystal Lee and Devra Caspit.

A bit after the sixteen minute mark, we tell an interesting story involving Tachyon and Tempest in the Bloodsworn Colosseum.

The last big pre-OblivAeon story we talk about for Tachyon is the Progeny story. We go over that starting around 19:30. This is a major turning point for Tachyon's powers and story.

At the start of the Questions segment, we do a bit of Talking About How To Questions. We get SO MANY questions, and we love them. But they've gotta be tagged properly or we might miss it. And that would be sad! We don't want to miss your questions.

Oh, boy. At just after the 55 minute mark, we're gonna say a thing about Tachyon that you're not all going to love. But it's true!

At 58:15, we reveal the name of a foe that has never been publicly named before!

At around the hour mark, we dig into the Iron Legacy timeline: Tachyon's role there, some things she does, some things that happen to her - it's all pretty rough.

At the end of the question segment around 68 minutes in, we talk about a Tachyon story that happened in Fanatic's book Absolution. We do some defining of blood magic and vampires, too!

See you next week to talk about Tachyon's cousin!