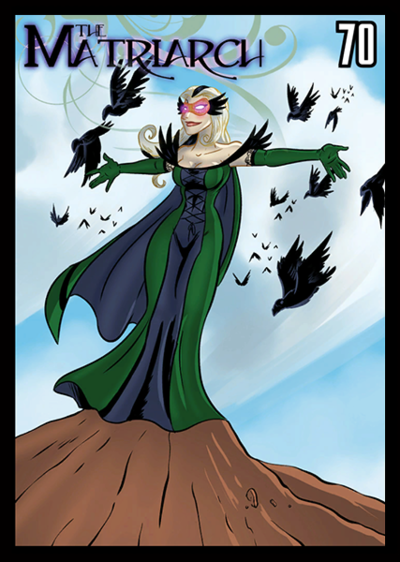 Let's talk about Lillian Corvus in her many forms!

I got all artsy with today's image! In case you're not sure which art is which Lillian Corvus:

We finish up the villain portion of this podcast in the first fifteen minutes! Wow!

At the 14 minute mark, we begin digging into an event revealed in the OblivAeon lead-up ARG, the story of Dark Watch #7.

Just after the 35 minute mark, when discussing GloomWeaver, Christopher talks about that villainous entity getting encased in a doctor. Not sure what we're talking about? Listen to the GloomWeaver episode!

Just before 40 minutes in, we read a question that leads us to tell the backstory of the Mask of the Matriarch and its fowl power! About time!

Then, at 42:20, we talk about a special necklace that ended up on a particularly famous boat.

Just after the 49 minute point, we get a letter from L. Nate - or, as we prefer, El Nate! Then, Christopher uses... some kind of accent. We apologize to listeners everywhere. Especially L. Nate.

Just before 52 minutes in, we claim we're only halfway through the episode. That was clearly false. We have no concept of time. As we prove with the OblivAeon Kickstarter! Oooh, sick self-burn! (Ow.)

Oh, also, we cancelled the future. We cover that a few minutes after the hour mark. Sorry about that. Future is cancelled.