The Letters Page: Episode 154
Black Fist: Grandmaster of the Streets #1 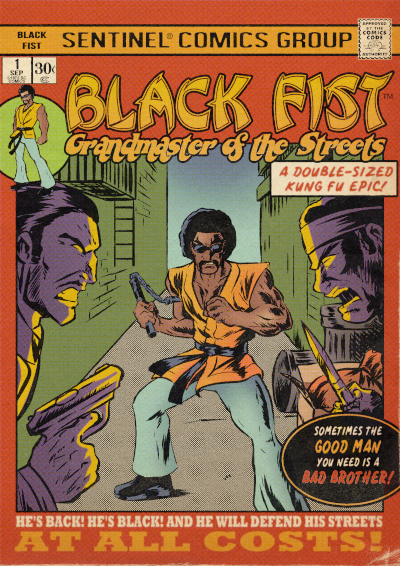 Hey, friends! Adam's back, and he did an AWESOME cover!

It's good to be back recording together again. It feels like it's been a long time, even though it's only been a week away from each other.

After only a reasonable amount of goofs, we get right down to the brassiest of tacks. We start overviewing around 4 minutes in.

At the 40 minute mark, we get to your questions! We take questions on the topic at hand (or, rather, at fist), and we also some K.N.Y.F.E. questions, as well!

In the overview and question sections, we address some pretty heavy things. Unsurprisingly, writing a 70s comic about a black hero based on blaxploitation tropes would have been weighty in the 70s, and it's definitely still a rousing topic today. We want to make one thing clear here: black lives matter. If you feel like "all lives matter" is a fair statement, it's important to note that only when black lives matter will all lives matter. Nothing we say in this strange, performance art podcast where we tell real stories about fake comics should take anything away from that truth. We trust our listenership to understand that.

Finally, at about an hour and 17 minutes in, we talk a bit about the cover. But you've likely already seen it above in the show notes!

Oh, and Adam sent me a photo of his pan and spatula that he uses for making eggs. Here it is:

Don't mind the ghost hand in the lower left corner. Adam's house might be haunted, but at least those ghosts love his eggs!

Don't forget to check out the Letters Page Patreon! And, if you want to send in any questions, use our handy form! Catch you next time!