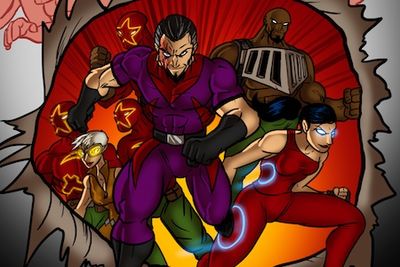 The longest episode yet!

I know that this is a podcast about characters from a fictional comic book series, but we start off by talking about the weather. A bunch. So, that's fun!

Just before the four minute mark, we explain the format that we're using this episode, since we're covering a bunch of characters with overlapping stories. A thing we don't mention but is very true: this episode references a TON of other episodes. In a lot of ways, the Vengeful Five are a product of their opponents, so there's a lot of "inside baseball" talk in this episode.

First we mention Baron Blade... and point out that he's got an episode all of his own! Check it out.

Then, we move on to Fright Train. You might want to listen to the Bunker episode if you haven't yet, as Fright Train and Bunker have a shared history. (The Baron Blade episode is also relevant to Bunker's backstory. As is the Setback episode!)

There are lots of important links in these show notes.

Next, we move on to Ermine! In her story, we reference both the Mister Fixer episode and The Wraith's episode. And also The Chairman's episode!

The next character we cover is Proletariat! There's a lot of interesting references going on here, but the only episode I can really point to for you here is last week's Absolute Zero episode.

The final member of the Vengeful Five is Friction. The relevant episode tie-in here is the Tachyon episode.