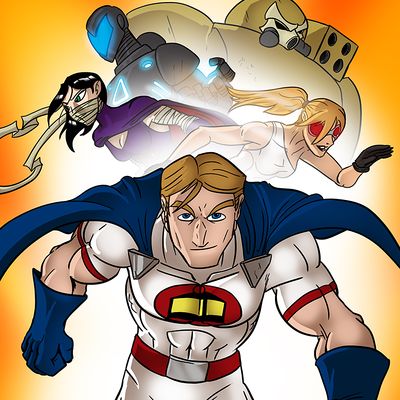 It's everyone's favorite team of heroes!

We talk about every published incarnation of the Freedom Five and the Freedom Four, and often go down rabbit trails of nonsense, philosophy, or sometimes outright lies. Enjoy!

Lots of callbacks to previous episodes today, but also a good deal of call-forwards! We hint at the contents of the episodes of Haka, Ambuscade, the Slaughter-House Six, and more!

The Q&A section in this episode is particularly robust, as well!

IMPORTANT! Starting exactly at 58 minutes and 10 seconds into the episode, we start talking about major story spoilers! If you don't want story spoilers for the Sentinel Comics RPG timeline as they're things you'll get to play through, please skip from 58:10 to 63:40.

As we mentioned last week, we still have the demographic survey going, so if you haven't gotten a chance to answer it yet, please do! Help us grow the Letters Page!

On Thursday, there will be a Dark Watch Interlude! Also, next week, we're recording both the Chokepoint episode AND the K.N.Y.F.E. episode, as Christopher will be in the UK from the end of May through the first week of June. So, get your Chokepoint and K.N.Y.F.E. questions in now!