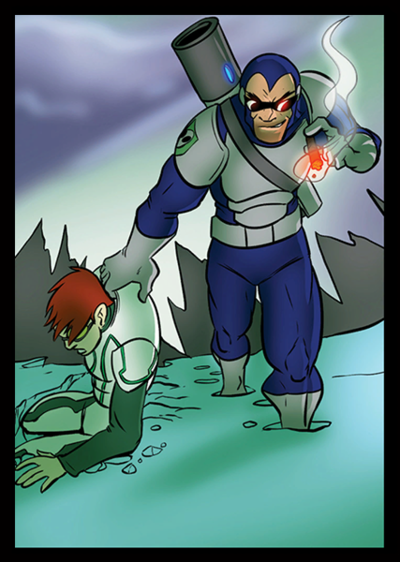 Let's talk about a shady organization that reaches throughout the Multiverse!

At the beginning of the podcast, Christopher predicts that this episode will have a run time of an hour and twelve minutes. Turns out, didn't even make it that long!

This episode, we cover F.I.L.T.E.R. in all of its incarnations, get into The Block - the extradimensional F.I.L.T.E.R. prison and HQ, and also talk about the story of Sergeant Steel and his Steel Squadron!

Just before the 17 minute mark, we mention that the K.N.Y.F.E. episode is essential listening for the story we're about to tell. If you haven't listened to that one yet, go do so!

We get to introduce the character of Felix Stone in this episode! Exciting times. (We also dispose of him. Whoops! Spoilers.)

As promised, here is the Time-Crazed Prisoner from The Block.

As we mention at the end of the episode, the next few recordings are all going to happen pretty quickly. Paul and I will be out of town for a wedding in a couple weeks, and we're all more nose-to-the-grindstone than ever right now, so we're doing a pile of recording this coming Friday, and then skipping a week for weddings, and then doing another pile of recording the Friday after that. So! Hit us up with questions for these characters ASAP!