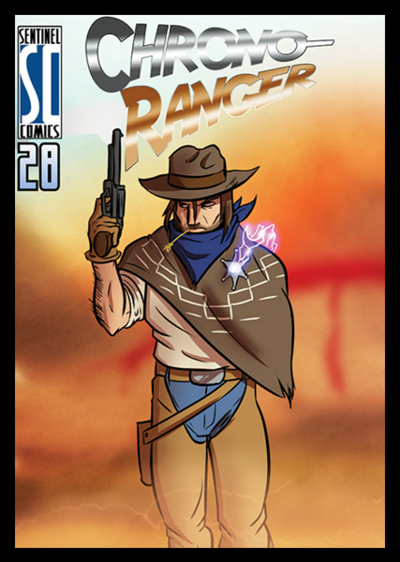 Today is an American holiday, so we're going to talk about an All-American hero!

Look forward to all manner of voices from Adam in today's episode!

About 10 minutes in, we introduce the robot named CON. And yes, we will explain CON in this episode. It's about time!

At the 20-minute mark, Adam refers to human flesh as, "Delicious, delicious flesh." We just want to mention right now: we do not support or advocate cannibalism. Adam does not consume human flesh and he does not think of it is actually delicious. That line about delicious flesh was from Plague Rat's point of view.

Right after that, we explain how time travel works. So, that's cool.

Around the 47-minute mark, we say that Chrono-Ranger mostly acts in the main canon timeline just after saying that he act in a bunch of different timelines. Turns out, both are true. In the bulk of Sentinel Comics, he's doing stuff in the primary timeline, but in his occasional solo limited series, he shows up in and alters many different timelines.

In the future section, we actually reveal a decent amount of story, both from the Tactics timeline and the RPG timeline. A lot happens to Jim Brooks in both futures, including two different name changes.

Thanks for listening! Get your Plague Rat questions in now!